Spotlight: Death in the Family by Maggie Mundy 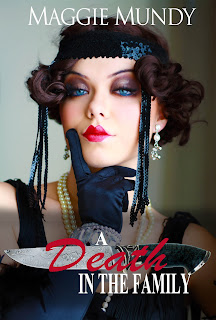 About the Book:
A Death in the Family is a 1920s murder mystery with a paranormal twist.

Finding out who killed her aunt means socialite Annabel Larch must give up her decadent life. She needs help from the mysterious Isaac Pennington, who carries physical and mental scars from World War 1 and for all she knows may be the perpetrator.

This thriller involves Brazilian artifacts, heroin dens and cult worship. Isaac and Annabel have to trust each other and sort through the clues to find out who slew her aunt and try not to get murdered themselves.

Why a Murder Mystery?
I have always written stories with the odd dead body turning up, but this was my first attempt at a murder mystery. I am not sure if there is a right or a wrong way to write one, but I didn’t know who the killer was when I started out. It was great fun to write and find out who was the culprit. I loved reading the old Agatha Christie novels and was always amazed by all the red herrings she would put in and hope I did the same.

I really enjoyed researching the time and was fascinated by how advanced criminal investigation was even back in the 1920s. I am in the process of working on a second book with The Larch Detective agency called A Death at the Theater.

“Get out of my way,” Annabel yelled, her headdress swiped aside and crushed underfoot as she reached Gwen. She fell to her knees as a groan of pain left her lips seeing her beautiful aunt’s neck bent at a strange angle. Annabel’s head kept shaking as if it was untrue, but her heart knew better. Her eyes knew better.

“No,” she screamed. The sound could never be loud enough or long enough to cover the loss. People moved away fearing the ferocity of her grief.

Gwen’s Cleopatra wig still covered her face. Annabel stared as if it was a picture she was trying to absorb but stay separate from. It didn’t work. She pulled Gwen in her arms as if hugging her would bring back life into the still body. It didn’t. The agony of loss cleaved through her body as if it was being drained of all energy. Rocking back and forth, her tears flowed down her cheeks as gut wrenching cries were drawn from her throat leaving it raw. This couldn’t be possible, her strength, her world had gone.

Now do stop that crying dear. You’ll need to find out who killed me.

The world stopped. Annabel’s breath stopped. Who had spoken? It was Gwen’s voice but her lifeless form lay still in her arms. Annabel brushed the hair of the wig back from her aunt’s face. People were gawking at her, she didn’t care, but she didn’t want anyone to see Gwen like this. She wanted them gone.

As Annabel breath left her mouth it misted as if she were outside. It was midwinter in Bath and you would expect it out there, but not in here.

A blast of cold air blew across the back of her neck causing her body to shiver and brought goose bumps up on her arms. Annabel took a deep breath as she slowly turned towards where the cool air had come from.

The scream left her lungs as she saw Gwen standing next to her. Only this Gwen was see-through. No one else screamed. They all stood around her ogling as if she was the ogre prizing its victim in its arms. They sickened her. It didn’t matter to them; they just continued to stare at the dead body in her arms.

Someone pushed me darling. There seems to be a knife in my back. I really do look a mess don’t I, and I had gone to so much effort this evening. 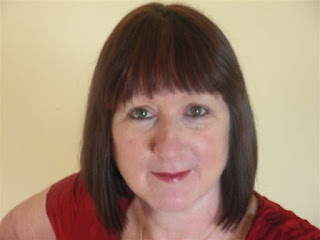 She has also performed for many years in corporate entertainment for which she wrote her own sketches, which probably explains why her head is so full of characters. She loves writing romance but thinks falling in love can be scary, especially in her stories where creatures of the night really exist.

淫娃免費視訊聊天室 said...
This comment has been removed by a blog administrator.
1:01 AM