"Firsts" in a Long Career 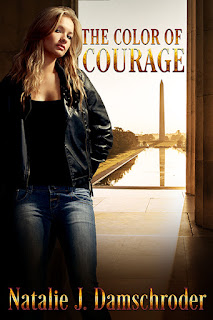 The Color of Courage was released yesterday by Soul Mate Publishing. It's my 22nd published novel, nearly 16 years after the release of Hunter's Song. After so much time and so many books, it's kind of amazing that I can still celebrate firsts with number 22.

1. My First Superhero Book (also the first in the series).
I actually wrote it 10 years ago, before the current boom of superheroes in TV and film. I've always loved superhero romances, but I wanted, as usual, to be different from everyone else. I'm not sure if I managed it, especially now that superheroes are all angsty and stuff. Mine have to deal with everyday problems like bill collectors and a-hole exes and day jobs, because it's not like saving people earns you a living. Of course, that's all on top of battling someone who is determined to take them down, and Daley, the heroine of TCoC, also has her personal insecurities and a complicated love life to deal with.

2. My First Urban Fantasy
Because of the way publishing works, Goddesses Rising was published before The Color of Courage. So to everyone else, it's not my first urban fantasy. But it's the first one I wrote. The first story that strayed from the romantic focus. The romance is strong, of course, it always will be in what I write, but it's not traditional. We're talking more Elemental Assassins (Jennifer Estep) and less Superhero Central (Julie Kenner). There's also more action and external conflict, and more personal internal conflict than there is romantic conflict.

3. My First First Person POV
Again, Full Fusion and Shadow Mission, the books in my YA series, were commercially available before The Color of Courage. But I wrote TCoC first. Why first person? Because that's how the story came to me. Ian, Daley's boyfriend, breaking up with her in scene 1, and Daley not seeing it coming. Her superpower is being an empath, seeing emotions as colors in a person's aura. But she can't see emotions that are about her. So that just had to be written from Daley's point of view. (I have to admit, it's hampering me now, because I'm craving Dev's POV in The Light of Redemption but I'm telling Harmony's story and Dev is just a part of it. A big, powerful, awesome part. :) )

This book is an incredible value, at 92,000 words and only $2.99. You can buy it here or read the opening scene here. But read on for an exclusive excerpt!

~~~~~~~~~~~~
Mr. Mustache drove us out to about twenty yards from the wreck, then idled in a little closer before cutting the engine and dropping anchor. The closer we got, the more frenzied the dog became. The woman appeared to be unconscious, possibly from a head injury. Her blond hair was matted with blood.

“Can you calm the dog?” Summer asked me in a low voice. I was already trying, building my bubble and projecting it outward. The dog’s fury was too intense, though, and we were too far away.

We studied the scene for a minute, riding the boat up and down in the chop.

“Let me see if I can summon her.” Kirby lifted both hands and concentrated. The woman rose a couple of inches, but then stopped. Kirby shook her head.

“She’s caught. I don’t want to rip a leg off or something.”

“I’ll get in the water.” I’d already moved toward the side of the boat when Trace put his hand on my arm.

“That dog will tear you apart.”

I crouched in the bottom of the boat to avoid tipping it. “I can calm him. Animals are simpler, I’m sure I can do it quickly. Then you come in, go under, and untangle her. We’ll drag her to the boat. The dog will probably follow, swimming. He won’t be much danger in the water.”

Trace didn’t like it. His anxiety and fear were growing, as were all of ours. We shared a bad feeling about this, but had no idea how to prove it was a setup, or prepare for it, or stop it. We could only rescue the woman.

He nodded, once. I stood, adjusted my flexi-shield and double-checked that my boots and gloves were secure to my suit, and dove in.

I’d scuba-dived before, but I’d never gone in the water with my suit. The water moved around me, but didn’t touch my skin. The suit held air and buoyed me immediately to the surface, which was good, because the flexi-shield made me feel like I could breathe, but its filters closed as soon as there was no airflow. Any air trapped in the shield wouldn’t last long. I’d have to surface to breathe.

I gave the others a thumbs-up and started a slow breaststroke toward the dog. He’d stopped barking for a moment when I went in the water, but started up again when I swam toward him. Spittle flew off his jaws. His feet scrabbled at the fiberglass under them, his weight shifting with the force of his anger. I could see his teeth, clean and sharp, and was glad my suit would protect me. From being shredded, anyway.

I treaded water a few feet from his face and wished the flexi-shield had sound-dampening qualities. Kirby wanted to get upgrades, now that we had Auberginois’ money. Maybe that was a feature we should ask for.

“Okay, Charm, stop daydreaming and start working.” I concentrated on calming the dog again. My bubble touched his fury, pushing it back. But it wasn’t diminishing. It was like it sank deep into him, and my bubble bent around his body but would go no further. His behavior didn’t change. If anything he went more wild, the sharpness of his bark becoming shrill, almost panicked.

I concentrated, moving my arms and legs only enough to stay afloat and in one place, trying to force his emotion to change. Sweat trickled down my right temple. My jaw started to ache, and then my frustration began to affect the bubble of calm.

Trace and Summer were calling at me to turn back. I was about to when the dog yelped, did a rearing half-twist, and fell into the water behind the boat. He didn’t resurface.

I wasn’t sure if I had caused that or if something else had, but it didn’t matter. I dove back under the water as best I could, trying to see where he’d gone. There was no thrashing shape, no teeth about to grab my leg. I bobbed back to the surface as a splash sounded behind me. It was heavy, probably Trace. I set out for the woman, and a moment later he passed me, his dark shirt telling me he’d shed his suit.

Adam would kill him.

I saw why he’d done it immediately. The suits were virtually airtight and kept us afloat. Trace dove deep, his hands trailing over the woman’s torso and legs. He could stay down, his endurance allowing him to hold his breath for long periods. I watched him work to untangle some kind of line. The dog was still nowhere in sight. Then an odd movement caught my eye. The woman’s hand had risen out of the water. I lifted my head. She was looking right at me, her malevolence on par with Gino Scarengio’s on the ledge. I froze, my blood far colder than the water around me. She was with CASE.

But he couldn’t hear me. He didn’t have his shield on, so he had no com.

The woman grimaced and lifted her hand higher out of the water. Then I realized that was supposed to be a grin, and she was holding some kind of trigger. I screamed Trace’s name again and dove, but the stupid floating suit kept me from getting to him. She hung in the water, drifting as he untangled the line, and he had no clue anything was wrong.

I bobbed. Her thumb started to clench on the button. I dove again. Trace had stopped trying to untangle her and stared at the line stretched across his hands. He turned to me, his eyes wide, and I realized what he held. Some kind of waterproof primer cord.

She was going to blow us up.