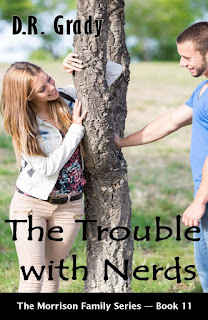 The Trouble with Nerds
by D.R. Grady


Odd things keep happening to Dr. Sara Newton. She’s a soon-to-be-unemployed pediatrician with an alleged stalker, a hot cop on her heels breathing dire warnings, and way too much student debt.

It doesn’t help that the hot cop is Clay Morrison, her best friend’s older brother. The man has made her heart pound and her palms sweaty since puberty. The trouble is, he only interacts with her when he’s expounding on new security measures. He sees threats everywhere.

Clay Morrison is frustrated. He hates his new job, misses his Army Ranger days, loves his well-meaning, pushy family—and when did sweet Sara Newton grow up? She won't admit she has a stalker, and she won't keep out of his thoughts. He can only protect someone in denial for so long. No matter how attractive she is...

Clay and Sara are circling each other, trying to meet in the middle. Then a brand new threat sends them in a completely different direction.

The man in front of her grinned. In a twisted parody of a grin as he reached for her. She eluded with a slick move from Janine, but the man flowed with her. As though he had anticipated her action. This time she thrust forward to jab him in the knee, then followed through with a shot to the crotch. He dropped to the floor, grabbing at his damaged goods as she stepped over him to flee the small room.

And slammed into a solid object. The hard hands circling her arms weren’t friendly. This man’s gold tooth gleamed in the dimmed light, and the flash made her heart sink. To the catacombs. She spun, trying to break his grasp, as Greg had taught her.

His grip didn’t falter. Instead, he used his hold on her upper arms to sweep her off the rug and over the men all around them. She shrieked. Just because they wanted to keep quiet didn’t mean she had any intention.

Especially with fear now clouding her thoughts, because her heart thumped and sweat coated her top lip. She knocked her head into his chin and let out another scream. Putting as much volume into it as possible. He countered with a fist to her chin.

The blow snapped her head back, and blanked her mind as pain ratcheted up her jaw into her head. Everything blurred before she yanked up a hand and thrust two fingers into his eyes. Greg had warned there was no need to play fair in battle, so she jabbed at his eyes and used her aching head to free herself, head butting him whenever the opportunity arose.

Her feet were free so she aimed for his knees. Desperation and pain fueled her actions, no matter how cliche. The man laughed at her efforts. Red slashed across her vision as she thrust away her aches and the nasty taste in her mouth. At the clamoring of her common sense, yelling at her to shrivel into a sack of pleading.

She wiped blood off her lip as the images in front of her narrowed to this leering man with his ugly golden tooth. Maybe she wouldn’t win this, but she’d do her best to make Clay proud.

This time when she jabbed him, she did so with her medical expertise. She hit him in the solar plexus and then followed through with a blow to the nose. Next, the money shot. A swift knee to the groin. It was gratifying when he cried out, and crumpled.

Her success surged to her head. Triumphantly, she spun, right into the chest of the largest man she’d ever seen. This might be a gorilla pretending to be a man. He was hairy and needed to bathe, and he leered at her just like the idiot she’d just toppled.

Sara’s bravado faltered and scuttled away with a whimper as she stared at this person so much bigger than her. This is why guns had been invented. Because there was no way...

Not about to disobey, she darted between the gorilla’s legs and slid across the rug. Her sweater caused drag, but she scrambled to her feet, and sprinted down the hallway. Away from the terror behind her. Her heart pounded in tune with her fleeing footsteps as her breath came in short, staccato gasps. 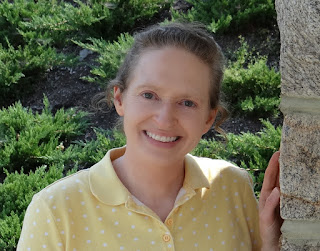 D.R. Grady lives with her husband near Hershey, PA. She adores chocolate, laughing, collecting bags, books, and shoes, and writing stories that resonate with others.

Other works by D.R. Grady

Treasure Me
Save Me
Trust Me
Heal Me
Love Me

A huge thank you for hosting me today!