So why was I enduring all three for nearly 4 hours last night? 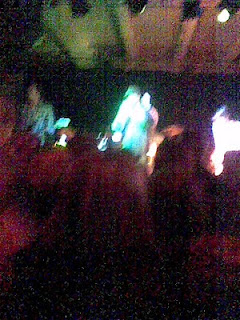 Yeeeahhhh...I forgot my camera. So you probably can't tell from my crappy little cell phone picture that the guy (yes, it's a guy) in the center is Christian Kane.

Kane came to Podunkville last night, and the concert was free, sponsored by a local radio station, so I dragged Misty Simon along with me and we stood in a shoulder-to-shoulder crowd, on cement, for two hours before the band came on. The smoke made me nauseous, as did the super-greasy hair of the guy in front of me. He kept backing up into me. I held my ground—had no choice, really, as the people behind me were up against my back, and one chick kept hitting me in the head with her arm as she held her camera up to take pictures of the empty stage. So the guy kept turning around and glaring at me, just because I had my arm up in front of me so he wouldn't be touching my body when he backed up. And then he friggin' ELBOWED me in the gut, the jerk. I said "Hey, I'm just standing here, you keep backing up. Knock it off." Not sure if he heard me, but he kinda stopped.

The music they played during those two hours was luckily not just country, so it was fine, but so loud my ears were all plugged up before the band even came on, which made the experience less enjoyable. The band itself was so loud my clothes shook with every beat of the bass drum. No lie—not just vibrated, but shook. Like someone was tugging on my sleeve.

But the band was great, and I'm really glad I got to see Christian Kane live. I never need to do it again, and it will take Jason Manns to ever get me back into the Hardware Bar, but it was fun, especially hanging out with Misty. Can't go wrong there. :) Plus, the Misty of Awesomeness bought me Kane's CD, and it has the song he wrote for Leverage, so that's cool. I might actually be able to tolerate some of the other songs, too. :)

~~~~~~~~~~~~~
Today was a great day, too. Full of family togetherness. We went out to lunch to support the high school color guard, and Number One's friend who is on the color guard was there, so she got to see us supporting her. :) Then we went to our local Borders, which is one of the ones closing. The line was all the way to the back of the store for the entire time we were there. It took me half an hour to get to the register, where we spent nearly...well, let's just say it was more than our usual grocery bill. :) Most of the discounts were only 20%, too. We should have waited a couple of weeks.

Anyway, if all the 200 closing stores are full like this, maybe it will give Borders an infusion of cash for their restructuring.

After the book-buying, we watched The Three Musketeers together. It's very cool that Number Two is getting old enough to have an interest in watching some things we like, instead of being limited to kiddie movies. Some kiddie movies are fine, but it's nice not to leave her out of things.

AH, the days of shows/concerts. I really don't miss that whole people touching, hitting, accidentally punching me, getting drinks spilled on me, and inhaling enough smoke to cook my lungs experience. But the music was always fun. Oh gosh...that makes me sound like I'm getting old!! Glad you had a great weekend!