Super 8 and Ryan Reynolds in his Underwear

I kind of miss the summers of 4 or 5 years ago, when the kids went to Camp Nana every week and J and I went to a movie the night they were gone. Back then, we couldn't do anything until they were asleep, so it made us giddy to be alone and on a date at 7:00 p.m. with no kids at home and no babysitter. Back then, there were also new movies almost every week that I was dying to see.

Things are so different now! No Camp Nana this year, but the kids can stay home alone, so we can do whatever we want. Unfortunately, while there are movies I really want to see, none of them are at the "OMGgot-to" level. Not even Harry Potter, but that's a post for another day.

Anyway, J and I have seen two movies in the last two weeks, but we saw them on the weekend! At night! On opening weekend, no less!

Super 8 was as good as I expected it to be. I mean, JJ Abrams and Steven Spielberg! Not that they never make duds, but this wasn't one of them. It was like they said "what if ET was captured before Elliott found him, and was held for 20 years?" The story isn't focused on the alien, but on the kids and families in the town where he escapes. The acting was superb, especially from the kids, and with the exception of one unnecessary, heavy-handed symbolic moment, the whole thing was well done. 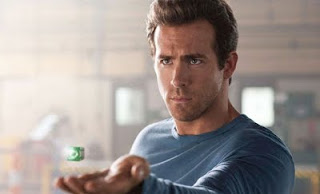 The other movie we saw was Green Lantern. Call me superficial, but I greatly enjoyed Ryan Reynolds in his underwear. I mean, in this role. He did very well with both the cocky, snarky fighter pilot aspect of his personality, and the side of him that was convinced he wasn't good enough. We had just enough hints at his relationships to see how much he cared. The rest, of course, was all spectacle. The actress from Gossip Girl seemed like she'd had surgery two days before shooting and was trying to act through a haze of morphine. The subvillain was balanced, and the Big Bad as gorgeous as he was frightening. All in all, not the best superhero movie ever, but far from the worst.

Email ThisBlogThis!Share to TwitterShare to FacebookShare to Pinterest
Labels: Movies

i've seen Green Lantern and really enjoyed it, but felt it finished as it was just getting started! I must go and watch the other one.

I think both will be rentals for me, but my youngest went to Super 8 with his friends yesterday and really liked it.

Of course, RR in undies on the big screen...

You're right, Erastes, I forgot to mention that part of it. The whole thing was setting up the sequel. Which is okay if the sequel has more meat! :)

Gwen, watching at home means you can pause, and rewind, and play,and pause, and... LOL