Guest Blogger Megan Hart with FREE copy of ALL FALL DOWN 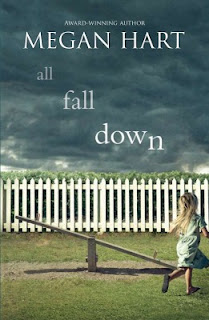 A lot of people have been asking me why I chose to write about a cult. The short answer is, because they’re scary. The longer answer is, I didn’t write a book about a cult, I wrote a book about a girl who was raised in a cult and is forced to join “normal” society after her mother forces her out. With no place to go, Sunshine takes her three kids to live with the biological father she never knew existed and his wife Liesel, who thinks this ready-made family might be the answer to all her prayers.

I wrote a book about a family trying to learn how to survive and how to make a life together when everything they all ever knew has been turned upside down. I wrote about losing everything you’ve ever believed is true and trying to find a way to move forward instead of being held back.

The cult is just part of the background. A fascinating, scary part, yes. But I also tried to show just why someone would not only want to join a cult, but how someone might genuinely feel like life in the cult is better and more normal than the type of life general society agrees is right.

Sunshine was sort of difficult for me to write, because I’m not sure why people would ever let themselves be brainwashed into following a leader, no matter how charismatic, whose teachings bring them harm. Yet as I researched cults, I discovered something disturbing...I began to understand how something so different, so off-beat, could become appealing and eventually, overwhelming.

I hope readers of ALL FALL DOWN enjoy the story and maybe discover within themselves how it feels to find out that everything you thought you knew about yourself can be turned upside down.

Want a copy of All Fall Down for your very own? Comment here about a time you changed your mind about something you thought you knew. Or just comment, I’m easy that way.
~~~~~~~~~~~~~~~~~~~~~~~~~
Learn more about Megan here:
www.meganhart.com

In the midst of a chaotic midnight assembly, Sunshine is forced out into the darkness. Holding a scrap of paper scrawled with a stranger’s name and address, Sunny grasps the hands of her three small children and begins her escape.

Liesel Albright has dreamed of starting a family. She never bargained on inheriting one already in progress…or one so deeply damaged. When nineteen-year-old Sunshine appears on the Albright’s doorstep claiming Liesel’s husband Chris is her father, all they can think to offer is temporary shelter. The next day, they’re stunned by the news that the Family of Superior Bliss, led by a charismatic zealot, has committed mass suicide. Sunny and her children haven’t just left the compound–they’ve been left behind.

Now, instead of a baby of her own, Liesel must play mother to the four survivors while Chris retreats into guilt and denial. For Sunny, however, a lifetime of teachings is not easily unlearned. No matter how hard she tries to forget, an ominous catechism echoes in her mind, urging her to finish what the Family started.
at 12:01 AM

I'm not sure I can count the number of times I've changed my mind about things. I learned an awful lot about other religions in college and definitely changed my thought processes with regards to other cultures and practices.

I have changed my mind lots of times about things I wish I wouldn't have but the time that sticks out the most is when I lived in an apartment and my neighbor below was kinda weird and she had to daughters. Well I use to see her out without these kids all the time and I would hear them crying they were just little kids one was like 2 and the was a newborn. Long story short I thought she was abusing them but was never sure so i never called cps well about 8 months later I had moved out and there was a story on the news that she killed her baby! I wish I would have went with my gut and called cps that baby might still be alive today!

It can be very thought-provoking, Danielle, when you dig into it, for sure.

Amanda, that's awful! I had a similar experience when I was a teenage babysitter with suspicions of abuse but no evidence. It haunts you.

I'm constantly changing my mind about things. I'm a first time parent, and even though my daughter is 6, she still teaches me something new every day and constantly challenges me to be a better mom... a better person. I'm also in college, learning to e an X-ray tech, and I've actually lost count of how many things I thought I knew about the human body but really had no clue. Life has a way of making you change your perspective constantly - whether you're willing or not.

Growing up I thought my Dad never cared about me. He and my Mom divorced when I was an infant and we didn't spend much time together as I grew up. (my Mother's version of life was also very one-sided and I was essentially brainwashed to believe the worst). I cut all ties when the monthly support checks legally stopped. I felt confident that I did what was right but through the years i always wondered...what if? What if i was wrong? What if I was being cruel? Was i denying my children of their family because I chose bitterness? Well, a year and a half ago, nearly 22 years after cutting all ties, I made a choice. I was given a chance to open dialogue with my Father and I chose to do it. I have learned alot about him as well as myself. I have learned that judgement and bitterness are not welcome in my life and I look forward to a future with my family.

Life has a way of making you change your perspective constantly - whether you're willing or not.

Jennifer, that's very impressive. I think it takes a strong person to do what you did.

What a great insight into the book, Megan. Thanks for posting this, Natalie.

I'm proved wrong constantly. I think I can bend the Sea Monkeys to my will and make minions of them, but that has yet to happen. I think there's only one "other white meat" and then I find out about 'possum. See? Always changing my mind.

It's rare that I've been absolutely sure I knew something! I'm sure I have changed my mind about many things on multiple occassions. For example: when I was a kid I wanted to be a teacher. Then, in my 20s I decided to become a sign language interpreter, feeling certain that it was my "calling". Now, in my early 40s, I am back in college, studying to be a teacher.

Imagine It, Achieve It, Dream It, Become It said...

Up until the beginning of this year, I thought I knew the direction/path my life was taking me. However, with my husband leaving me in January, I have had to re-evaluate everything. It has been quite the upheaval for me. My recent focus has been on what makes me happy and, besides my daughter, what I am passionate about. I have learned to look at life in a new way, and it has truly begun to give me new perspectives on what I CAN do with my life, and the possibilities are limitless. I am looking forward to 2012 and learning about the new me!

The one big thing I've changed my mind about as I've aged is my parents. I used to thing they knew nothing, now I realize they are pretty darn smart. I'm lucky to still have them to give me advice I really want.

Trying to post on my own d*** blog for the THIRD time!

Ava, I'm confident you'll conquer those sea monkeys yet. Have to concede the point on the sea monkeys, though.

Interesting about coming full circle, Steiner. Maybe both are your callings. Good luck with school!

Katrina, I'm so sorry about the difficulty that launched you into upheaval, but I love your positive outlook. Good luck!

Gwen, I hope my kids feel the same way someday. :)

Okay, now, the winner of a copy of ALL FALL DOWN, chosen via random.org, is...

Please e-mail me at natalie @ nataliedamschroder.com with your snail mail address. If I don't hear from you by midnight EST on Sunday, I'll draw another winner.

Thanks so much for the comments, everyone, and may you all have the happiest of holiday seasons!

I haven't heard from Amanda, unfortunately, so back to random.org I go, and GWEN! You're the winner!

Please e-mail me at natalie @ nataliedamschroder.com (no spaces) by midnight EST on Tuesday and I'll hook you up.

Dang I am soo sorry I missed it! Thanks anyways though I will be buying it when it comes out!

amanda hampton said...
This comment has been removed by a blog administrator.
10:09 PM

Okay, Amanda, I got your address! Sorry this was so complicated. LOL Megan will mail out the book to you soon. Thanks!

Thank you I cant wait! I love megans books!