Finally! Here they are!

I'll spare you all the sightseeing photos. For one, because they can be found anywhere. For two, because if I'm in them, I look horrible.

I'm also not posting (to everyone's relief, probably) all 39 of the conference-related photos. Some are poor quality. Some have a weird face being made by one of the subjects--those are held for future blackmail. Some I think are great shots but the subjects don't agree or withheld permission to post them (Lisa, I'm glaring at you). Some are repetitive, too, and I'm trying to keep this interesting. So. Here we go.

This is probably the coolest thing I saw in San Francisco. I know, kinda pathetic, and someone told me they have them elsewhere, but *I* never saw one: 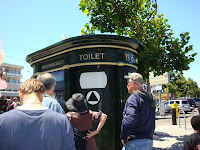 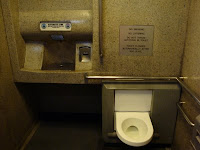 I had one more shot that was actually video, and it won't process properly. But you go in, do what you need to do--in a spacious, clean, unsmelly atmosphere with soap suds along the base of the wall--come out, the door closes, and the entire room gets washed. So cool.

Wednesday was also the day of sightseeing with my friends.


Wednesday night was the Literacy Signing, with 550 authors. I only took three pictures. Well, one of these was with Trish's camera, which got a better shot than mine did. 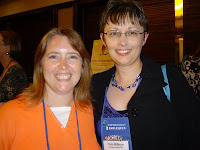 Me and Trish Milburn 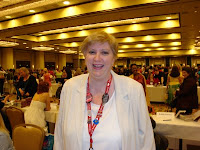 The Giddy Monica Burns
(go see The GabWagon for why she was giddy!) 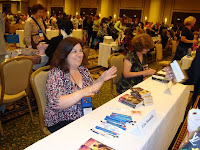 Thursday is about the Annual General Meeting and other non-exciting things, so not many photos here. 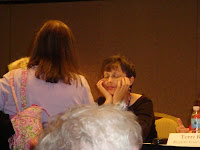 See? Not Very Exciting
This was actually just one of those freaky things, Trish blinked. She wasn't really falling asleep while that person talked.

Me, flanked by ML Rhodes (left) and her mom (right)

Cathy McDavid, Lisa Mondello (shh, don't tell her) and Me 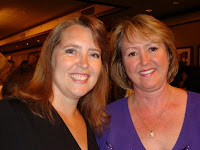 Me with Libby Banks

I didn't get a good shot of Pam in her finery, so here's her Rita nomination upon on the big screen during the ceremony.

And one final shot, from Sunday: 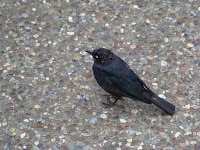 It didn't occur to me until the last day that a lot of the birds I was seeing, I might never have seen before. It didn't occur until I was walking along behind this guy, a Brewer's Blackbird. I got all excited that I could log a new bird in my bird book, then realized my bird book is Eastern Birds of North America. But of course this one has a wide range and was in the book anyway. So I got to log it, but being able to do so means it's not exactly an uncommon species. Oh, well.

So there you have it. My SF trip in not-so-concise images and explanations.
at 11:40 AM

Ok, I sooo want to hurt you right now! LOL Next year, hopefully the picture will turn out MUCH better. I LOVED that a toilet got top billing though! That's soooo you!

Ooops!! I meant to say that you like oddities and find them interesting. *grin*

Monica, that's a GOOD picture of you! You're so happy, you just light up the whole post. :)

And LOL on the toilet! I knew what you meant, but it's kind of funny. Thanks!

LOL! It does look like I'm sleeping, doesn't it? Funny you caught me mid blink.

You look like you had a great time. Someday I hope I can attend national too.

I know, Trish! I didn't even realize it at the time. I was just going to post "Trish all professional and board-ish." LOL