Number Two mentioned to me yesterday about how long it's been since I blogged. Two weeks! Geez!

So I finally got my act together, and here it is. 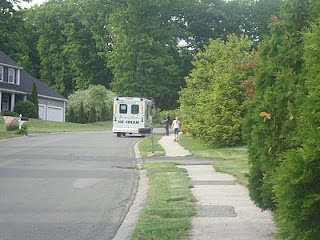 A little anticlimactic, huh? But let me set the scene.

We were at my cousin Joey's. (everyone else calls him Joe, but to me, he's just like the little cousin I grew up with, except taller. Okay, a lot taller, but still. He's Joey.) Anyway, it was me, and my brother, and my cousins, and their mother, and her father, and we're having a lovely time on the back deck, and suddenly, I hear it. Music. But not just any music. Special music.

It was the ice cream truck.

I was the only one, sadly, who got excited by this. Maybe in Massachusetts they still have ice cream trucks every day, but here in lame-o Pennsylvania, we NEVER have them. So we HAD to run after the truck! And we did! This pic is of course the Numbers catching it. I only pretended to run. :) After I snagged my cousin's camera because I'd left mine on the deck.

Yes, the picture I wanted was not even on my camera that was never where I needed it.

So that was our fit of nostalgia. I got ice cream for the girls and for the nephews, popping Spider Man's bubble gum eyes off before handing them over. The bribery didn't really work. I didn't get hugs goodbye that night.

But now that summer vacation is here (as of 10:45 tomorrow morning), I can't help the nostalgia. There is nothing so symbolic of summer as the ice cream truck! We need to start a business here in Central PA.

We have an ice cream truck that drives around incessantly...during the day. Yes, while the kids are at school. *eyeroll*

OMG that's so funny. I'd totally be out there!

I'm in!!
We used to have one around here, but he must not have wanted any business because he never drove slow enough for anyone to catch him.

I had a half second of seriously considering this. I mean, it's got to be a profit maker, doesn't it? Set your own hours, go to all the parks and stuff... Hmmmmmm.

And become huge eating all of the broken popsicles and fudge bars.
...but it is a tempting prospect.
Oh hey, and on the weekends we could sell martini's to the parents. I bet we'd do fantastically! LOL

Well, I'm already huge. :) But LOL about the martinis!

Stop that!
We always say we're going to move to the beach and run a lunch/martini wagon. It would be cool!

That would be very awesome.