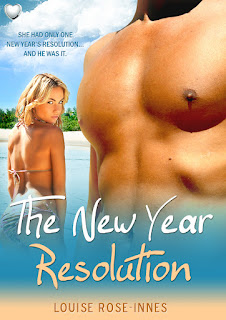 When my friend called me a few years ago and said, “My only New Year Resolution last year was to have a date for this New Year’s Eve, and it isn’t going to happen,” I replied, “That sounds like a romance novel in the making.” So she promptly asked me to write a happy ending for her, since it didn’t look like it was going to happen in the real world.

That’s the beauty of romance...

We live in a dream world of hot, alpha men who are rugged but gentle, rich but unpretentious and macho, yet caring. The heroines are feisty but sensitive, beautiful but confident, and successful in their own unique way. It’s an ideal world of escapism.

THE NEW YEAR RESOLUTION is the result of our conversation. Nicole, a single mum and divorcee, decides it’s time to get back into the dating game—but only because she needs some fun in her life. Not because she’s looking for anything serious. So a “no-strings” New Year’s Eve date with jet-setting eco-tycoon Ryan Jackson is just the ticket.

Except Ryan needs Nicole for reasons of his own... He’s out to change his womanising image, so as to raise money for his latest eco project, and he needs an ordinary, respectable girlfriend. Nicole fits the bill to a T.

So Nicole’s New Year’s Eve date turns into a week-long vacation on the idyllic tropic island paradise of Medjumbe – off the coast of Mozambique—with Ryan and his prospective investor. All she has to do is pretend to be Ryan’s girlfriend for the week, and enjoy an all-expenses-paid beach holiday.

Except the hot, balmy climate, the close proximity and the undeniable attraction between Ryan and Nicole make keeping their relationship on a pretend basis virtually impossible to accomplish. As their passion sizzles under the tropical sun, Nicole finds herself falling for the jet-setting playboy—which is a complication she does not need.

Already fragile from her divorce, with an important job and a child, Nicole can’t afford to put her heart on the line for a man whose previous girlfriends include an impressive list of royalty and supermodels. So she tries to back out of their deal, only to discover it’s a lot tougher than she thought.

If she leaves Ryan, his reputation will be in tatters and he’ll lose his funding—a fate she doesn’t wish to bestow on him. However, if she stays, and continues the facade, her heart will be inextricably damaged, which is a risk Nicole is simply no prepared to take.

Then the paparazzi get wind of their affair...

THE NEW YEAR RESOLUTION is available from Amazon.com here.

Louise Rose-Innes is a romantic novelist who lives in the United Kingdom. She is a member of the Romance Novelists Association (RNA) and a member of the Professional Writers' Alliance.

Louise has self-published three non-fiction books, two contemporary romances and one short novella. Her latest romantic suspense has been acquired by Entangled Publishing and will be available later this year.

Louise loves to hear from her readers, so visit her at www.LouiseRoseInnes.com or on her Facebook page - www.facebook.com/romantic.novelist or connect with her on Twitter - @LouiseRoseInnes.

Thanks so much to Louise for being my guest today! THE NEW YEAR RESOLUTION sounds like a great read and is already on my wish list!

If you all were to make a no-holds-barred new year's resolution like Nicole, what would it be?
at 4:06 PM

sounds like a cute read. And I love the conversation with your friend that set it off! Best of luck

Thanks Cynthia... As romance writers we're always on the lookout for heart warming stories. I'm glad I could give my friend a HEA - even if it wasn't real!
Louise