First, we wanted to go for a post-dinner walk. But the weather wasn't quite cooperative. So Mandy suggested we use the excellent canvas bags Joyce and Kristine gifted us with: 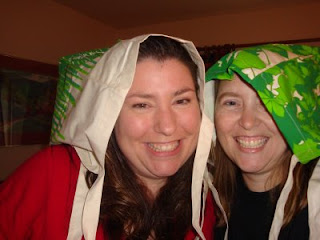 But it cleared up for a while, so we managed to get out.

Then we hazed Elizabeth. 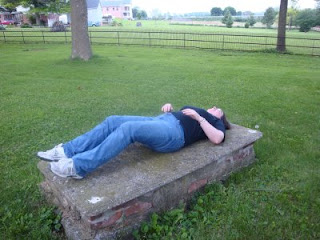 She was a new member on her first retreat! Had to do something! Actually, someone said something about how we should make someone lie down on a grave, and she volunteered. Said it was peaceful.

Remember the weird circle from two years ago? 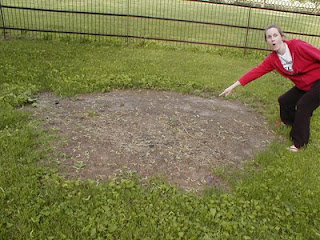 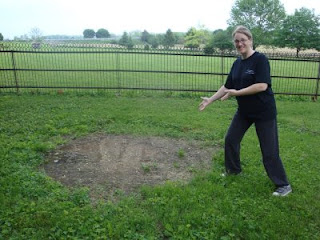 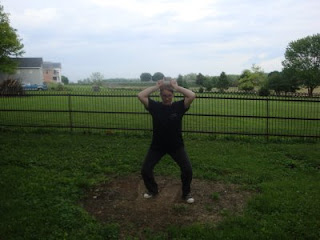 Supernatural fans know what a weird circle in a cemetery means, but the only zombie we encountered was Megan: 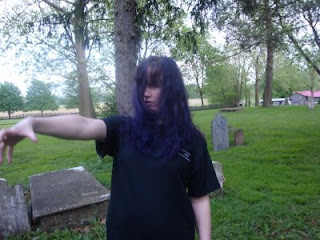 Vicki demonstrated how NOT to ride a playground dog: 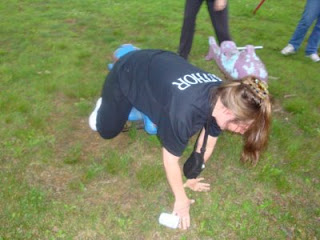 And then we went to the other cemetery, which we haven't done before. I don't know, it's just not as creepy without the fence: 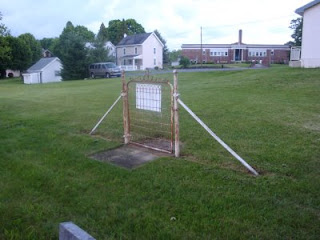 I don't think we'll be going back. I mean, how much fun is a cemetery if you can't bring coat hangers? 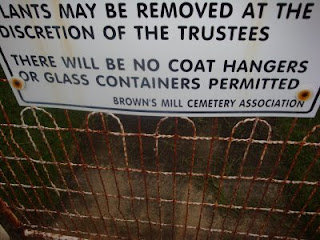 Saturday night we played our game. Here's Beth, posing after she won putting Johnny Depp together, defaced as he was. 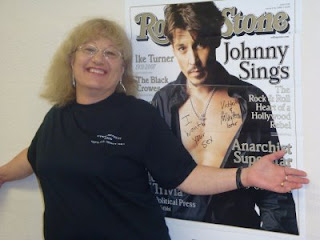 We laughed harder than at any other retreat game, and that's saying something. Joyce hyperventilated and had to sit down: 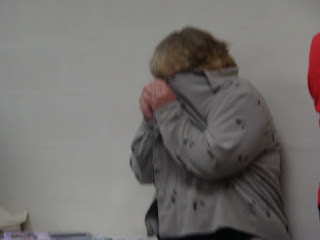 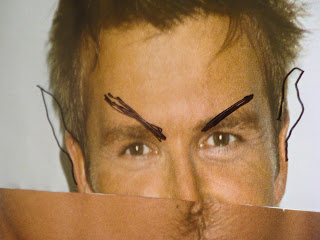 We were equal opportunity defacers, of course: 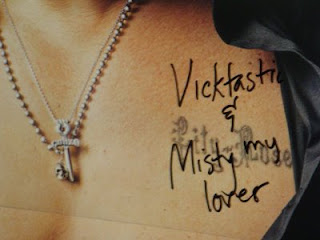 But honest, among all the insanity, we did work! 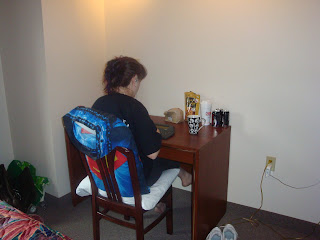 YAY!!! I want to go back NOW! Thank you for not embarrassing me with the cemetary thing :)

Are you being sarcastic? Because that picture in the weird circle is pretty embarrassing. :)

I'm assuming you mean the OTHER cemetery thing. :) I didn't get any good pictures of it, or I would have! LOL

I knew there was an after picture of me falling off that stupid blue springy dog! It could be much worse, so no complaining.
I think Misty means when she fell down the hill. I didn't get a good picture either because I was too busy laughing.
Good recap.
I want to go back NOW, too!

Of course you didn't get a good picture, you were showering her with dandelions. LOL

Is it May yet?

The bruise is a nice yellow color now. Actually bruises, I had one on the other leg, too.

I thought Misty was dead, which was why I was covering her with flowers. It was an appropriate place for her to die, I thought at least.

Still love the sign on the cemetery gate. So...basically if they think the flowers you put on a grave are ugly, they reserve the right to get rid of them. And your coat hangers, which, as you stated is absolutely no fun. I guess you can't drink beer and do your ironing in the cemetery...

I know, isn't that silly?

And it was, it really was.