This Awesomeness is Just What I Needed Today

Started at The Daily Dot here and here. But I loved it so much I wanted to embed the original videos all together.

I want to hug all those kids in the last video, but the passionate little one especially!
at 3:43 PM 2 comments: 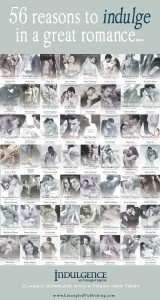 I don't write for the Indulgence line at Entangled Publishing, but I couldn't resist the opportunity to participate in the reveal of the line's sexy new look!
Indulgence brings together classic romance, new and fresh voices, and alpha heroes. They're short contemporary romances that are edgy, light, and whimsical and guarantee a happily ever after.

Below are three of line's newest releases. Check them out! And click the banner on the left to see all the fantastic new covers in greater detail. 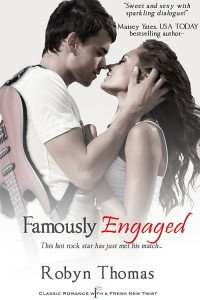 A chef and a rock star. They couldn’t be from more different worlds…
Rock star royalty’s favorite son, Jake Olsen, couldn’t help but interfere after listening to his future brother-in-law talk non-stop about his ex-wife, Beth Carlisle. Jake decides that the only way to get the groom’s mind off his ex-wife is to give her a fake fiancé.
Before Jake can convince Beth of his plan, he's forced to move in with her to avoid the paparazzi. Their instant attraction makes for a sizzling "first date", but soon Jake’s fame gets in the way and Beth wants out. Too bad Jake's figured out just why her ex is so obsessed with her, and he's afraid he's not going to be able to give her up either.
Now it's up to Jake to convince this chef together they make the perfect recipe.
Amazon | Barnes and Noble (Coming) 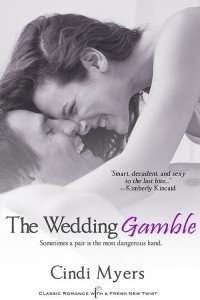 The Wedding Gamble, by Cindi Myers

Preschool teacher Laura Nichols is celebrating her birthday and sister's bachelorette party in Vegas. Being in Sin City is thrilling and she intends on tapping in to her wild side. Laura can't resist the added excitement that comes with saying yes when a hunky man off the street proposes...
FBI agent David Abruzzo has been working undercover as a thug to bring down the Zacolli crime family, but his cover depends on convincing the mob he came to Vegas for a quickie wedding. If they catch on to his plan, his cover's blown, and he's as good as dead.
Over the course of 48 hours, David and Laura use rollercoasters, glowing condoms, and exotic male dancers to stay alive and bring the crime family down. But it will take more than Lady Luck, one night of passion, and a little Vegas magic to turn their fake marriage into something real.
Amazon | Barnes and Noble 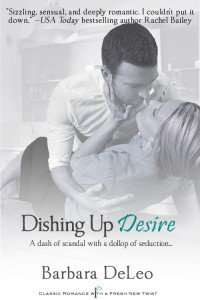 Dishing Up Desire, by Barbara DeLeo

Image consultant Blake Matthews is facing his toughest PR challenge yet: salvage the image of celebrity chef Kirin Hart. Once he does, he'll be able to acquire LA's most successful PR firm. But Kirin's no easy fix. She's stubborn about changing her comfortable homemaker image, and is being sued for sexual harassment by a junior staffer. She needs a PR lifeline fast. Only problem is Blake wants more than to make her over...
Kirin doesn't need a makeover--her fans love her as she is. But she could lose everything if the sex scandal and reputation that has followed doesn't get quashed right away. Kirin agrees to let model-perfect Blake work his magic for two weeks, but things get complicated when she can't deny the way her body flares to life whenever he's near.
Amazon | Barnes and Noble
at 12:27 AM No comments:

Gambling on a Heart by Sara Walter Ellwood 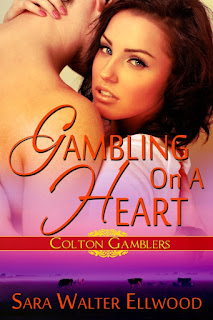 Gambling On A Heart
Book 2 of The Colton Gamblers

She once lost his heart on a bluff. Will she risk everything to win it back?

Beautician Tracy Quinn spends her days making the women of Colton, Texas beautiful, while living down the nickname of Olive Oyl, given to her by the only man she has ever loved—Zack Cartwright. She spends her nights alone, despite what her ex husband wants their friends and neighbors to think.

Ex-rodeo cowboy. Ex-bad-boy. Ex-Marine. Widower and single dad Sheriff Zack Cartwright can describe his life in exes. One ex in particular reminds him of what’s missing in his workaholic life: Tracy Quinn. For years since she broke his heart, he’s practically made avoiding her a second job. He still wants her, but can never go after her.

When cattle rustlers target her brother’s ranch, Tracy and Zack are stuck working together. Her son could use a positive male role model, and his daughter is wild for a chance at a “substitute” mom. But Tracy’s ex threatens to sue if she lets Zack near her son, and the Colton grapevine is abuzz with rumors about their past relationship. Is it worth the gamble to see if what they have is more than lust?

Excerpt:
“I was hoping you could keep me company this afternoon.” He skimmed his fingers over her cheek.

Her insides, heating up like lava under the surface of the earth, pooled in her low belly. Her lips parted.

Against her lips, he whispered, “Tracy, I want you.”

She had thought of little else since he’d left her standing on her porch Friday night. He was asking her to enter into a sexual relationship without any hope of a future--without love.

But she was already in love with Zack.

Both of their kids would benefit from them being together. Hadn’t that been what she’d decided while she tossed and turned in her big, empty bed?

With her gaze locked on his, she murmured, “I want you, too, but I have a stipulation.”

“I’m no one’s bed-buddy, Zack. I know what my reputation is in this town, but it’s all wrong.” She swallowed her rapidly thumping heart back into place. “I’ll only go through with this, if you promise to treat me as a serious girlfriend. That means we date, we visit with our families and we share our kids.” When his expression hardened, she quickly added, “Mandy likes me. And I adore her. I’d like to bring her here, to the shop, for a few hours and play. And take her shopping. I know your mom tries, but she’s busy with her foundations and charities she does for the Junior League.”

The breath she sucked in was full of Zack’s scent of sage and leather. “Meanwhile, you can teach Bobby how to ride and maybe take him to the sheriff’s department and show him around. Jake won’t like it, but I’ll deal with him.” Having laid her demands out on the proverbial table, she held her breath, waiting for him to tell her what she could do with herself. After all, a man of Zack’s caliber could have any damned woman he wanted. Tracy was just handy, and according to the gossip of her ex-husband and mother-in-law, she was easy.

He studied her for a few moments. “That’s more than one stipulation.”

“Tracy, it won’t change what I told you Friday night. I’m never getting married again.”

His words stung as much now as they had the other night, but she didn’t show him how much. She kept her face determined, as if she were haggling over one of his horses, rather than her body and soul.

“Fine. But I’m not a floozy. Yes, I’ve made mistakes. But I have my son to consider. And I’d hope you’d feel the same about Mandy. They’re bound to see us together. What do you plan on telling your six-year-old daughter when she asks about me? That I’m your friend with benefits? I know that isn’t what I want to be teaching my son.” Moreover, she didn’t want to give credence to Jake’s claim that she had no sexual morals.

“Okay,” he said at last. “We’ll play the game your way.” He pressed her against him. “Luck would have it I’m off this afternoon, too. I’ve already put in sixteen hours.”

When his lips captured hers, she knew she’d made a pact with the devil, but she couldn’t stop the elation surging through her. There was something he wanted from her. Sex was a big portion of it, but something else kept Zack from walking away and hooking up with any one of the many available women in town. 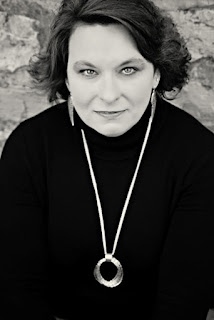 Bio:
Sara Walter Ellwood is an award winning author whose novel Gambling On A Secret was named by bestselling author Carolyn Brown in the Happy Ever After Blog on USA Today as one of her favorite romances of 2012. Although Sara has long ago left the farm for the glamour of the big town, she draws on her experiences growing up on a small hobby farm in West Central Pennsylvania to write her stories. She’s been married to her college sweetheart for nearly 20 years, and they have two teenagers and one very spoiled rescue cat named Penny. She longs to visit the places she writes about and jokes she’s a cowgirl at heart stuck in Pennsylvania suburbia.

She also writes paranormal romantic suspense under the pen name of Cera duBois.

Tour Grand Prize is a swag pack full of goodies! A signed copy of Carolyn Brown’s Just a Cowboy and His Baby, an ebook copy of my last release Gambling On A Secret, a notebook, a pen, and a custom jewelry set—all tucked into a keepsake box. A $20 value.

*Swag pack is for the entire six-week tour. Winner will be announced on September 1, 2013

*Open to Continental US citizens 18 years and older and where not prohibited by law.