A Little Bit of TV Love and Hate. We'll Start with the Hate.

It's the end of the main TV season, and I have a few things to say. THERE ARE TONS OF SPOILERS HERE.

Revenge
My boss and I watch this show and break it down every week. It's been fun, because it's very much not the kind of show either of us would normally watch, and we have extremely different tastes. But we normally feel the same about what happens in each episode. We love the same characters (Nolan and Jack, natch, and Victoria and Conrad for the opposite reasons). We hate the same storylines. And we are very disappointed in the finale.

I'm speaking only for myself, but there was a lot of "oh, come on!" The network (probably our local affiliate) screwed up and had a big blank spot where a commercial should have been, then the commercial, and then we landed halfway through Aiden's murder. That left me feeling cold and disengaged. I knew Aiden was going to die, though the showrunners seem to think that was a big surprise, and that might have contributed to my lack of caring. I liked Aiden, and I liked Emily with him, especially at the end, but it was always clear they weren't destined to be together. I figured he'd die heroically. There was nothing heroic in being paralyzed and smothered, and how the hell are we supposed to believe Victoria dragged his body from the city to the Hamptons and posed it in Emily's house? He was paralyzed so I guess the look on his face could have been frozen there, but he was paralyzed so how did his mouth get that open, AFTER a pillow was smashed against it? The whole doll thing was just stupid.

Then there was Charlotte cluing in to Jack's involvement in her abduction. She's a pretty dumb person in a lot of ways, but NOW she gets smart and doesn't confront someone about something? The cops can't really hold Jack. Charlotte thinking his hand felt the same and that she might have felt the rip in his car seat through her jacket and clothing is so far from real evidence it's not even funny. But that's all for the future. The drama and "uh-oh" of it were fine.

But the truly gasp-worthy moment? David orchestrating Conrad's escape and then knifing him in the street? WTF?!

They've teased the possibility of him being alive in a variety of ways all season, but successfully dismissed each one. Then in the finale they showed him on TV incessantly, in footage I don't think we've seen before, which of course was so we'd be sure to recognize him when he shows up on that rural road. I admit, I gasped hard. But this man who has JUST been cleared of crimes he did not commit decides the way to celebrate is to become a murderer? I mean...if you could get any more ridiculous than posing a dead guy to look like a blow-up doll, this was it. I assume he's going to come out of the shadows. And just how does he explain to his daughter why he let her think he was dead? Not to mention that hey, he's the most likely suspect for the knifing!

I think the Revenge writer's room got a little too hung up on Scandal-style shock value and forgot to support their story.

Agents of S.H.I.E.L.D.
Last night's finale left me feeling the complete opposite of how Revenge did. There was so much awesomeness it's hard to know where to begin.

Okay, let's go with the big one. I told my friend Gail over at SciFi Chicks that I expected Fury's bit to be short. But it was delightfully not! First, he had the best intro moment possible, when Simmons drags Fitz to the surface and there's good ol' Nick to save them. Then his banter with Coulson while Garrett tries to be the center of attention was hilarious. He INTERRUPTED him. We had to watch a couple of parts a second time. I'm sure others would stone me for saying this, but I think Nick Fury is SLJ's best role ever. :)

Coulson still manages to upstage him, though. Garrett survives the blast from a newly freed Mike/Deathlok and rebuilds himself with Quinn's fancy rebuilding machine, then begins to declare himself unstoppable before being interrupted (again) by a molecularizing weapon wielded by Coulson, who has no comment, no real reaction, and walks away saying "Found it! Told you it would be in here." It all plays such delightful fun with the melodrama of action-adventure.

Some fans (Gail!) dislike Skye with a surprising (to me) level of intensity. I've always liked her, though she's about sixth on my list of favorite team members. I really enjoyed her empowerment (I know, that's a bit of an exaggeration). She's had the least to contribute to the team over the season as a whole, but this time she got to free people and save lives and employ her skills to hugely successful results, and was able to dismiss Ward and pass him off to May for punishment. And oh, what fantastic punishment! Nailing his foot to the floor was one of the bits we rewound. :)

Then there was FitzSimmons. Goddamn, they broke my heart right before the escape. Fitz, for cripes sake, leave my heart alone! He shredded me with "I don't have the courage to tell you, so let me show you." Us hard-hearted, unsentimental Damschroder females admitted to getting a little teary. Number Two is absolutely furious that we didn't get to see him at the end, and the potential implications of his changes.

But the very best moment was when Coulson confronted Fury about T.A.H.I.T.I., saying it was only to be used if an Avenger fell. Fury shoots back, "Exactly" and Coulson's expression is just perfect. They set up the second season amazingly well, IMO.

Oooh! Ooh! And THEN. Agent Koenig! A different one (twins? clones? LMDs?), but played as the same kind of guy, and that was the cherry topping on the big pile of yummy whipped cream that's the only reason to bother eating cake (or pie) in the first place.

As with any show, there are a few tiny quibbly things that would mar the joy with too much scrutiny, so I'm ignoring them. :)

And that is puh-lenty of both gushing and ranting for one (way too long) blog post! If you watch these two shows, let me know your thoughts!
at 3:47 PM 2 comments:

As I mentioned an annoying number of times this winter, it was a long, wearying one. I spoke with many people about how little energy we had, how little impetus to do anything. The cold and snow were confining.

I was excited when the birds came back. Even when a mourning dove laid eggs on our extension ladder. But while it heralded spring, it didn't really change how I felt. I'd get momentary spurts of happiness when I heard the singing and chirping, but when I opened my office window to let in fresh air, thirty seconds later I was closing it and turning my space heater back on. 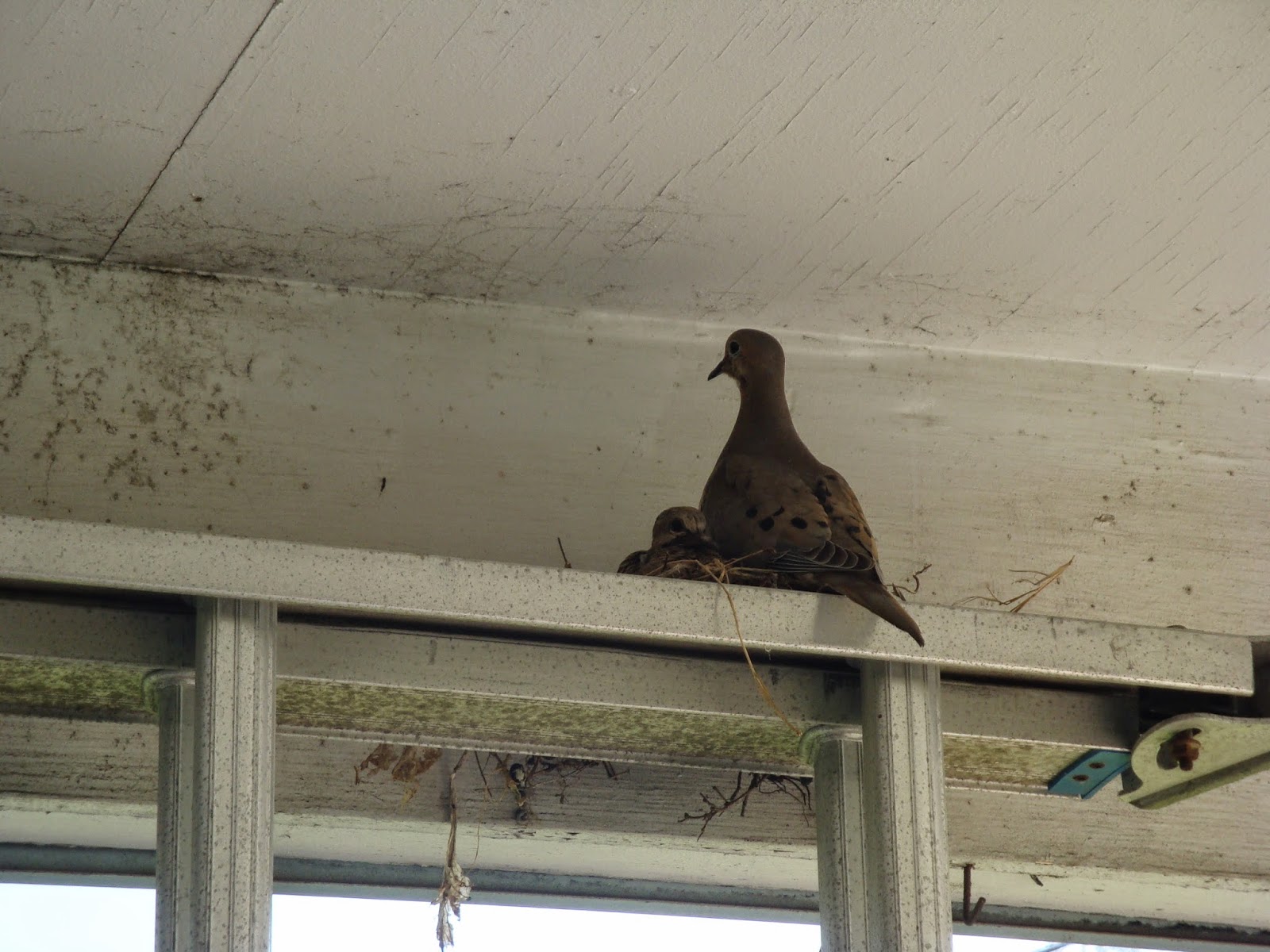 My husband named her Laverne because a robin moved in about two feet to the left of Laverne's nest. She's called Shirley. We put up little tape labels with their names on them. I don't have a picture of Shirley, because she flies off frantically every time we go outside. She's probably upset, despite the way the two of them fought, because a few days after the two babies hatched, they and Laverne moved on. They pushed the nest off the back of the ladder and disappeared. (I'm going with "they fledge fast" because I can't handle any other possible explanation and there's no evidence that's not what happened.) Anyway, I think Shirley misses her roommate.

ANYway, we've had some nice days, and I've been outside a bit doing yardwork and whatnot, but "it" hadn't happened yet. Cuz, you know, every time it hit 70, the next night it was back to 30 and all the people who were told NOT to plant their tomatoes until May 15 started screaming that their tomatoes were dead. Last week, we went to pick up Number One from college in Boston and I couldn't believe it was May 1 and there were NO leaves even budding on the trees there. In the city itself there was a hint of green, and a few flowering trees were starting to get some color, but in the rest of New England it might as well have been February. So depressing.

Then today I drove Number One to work and had lunch with my husband and did some flower shopping. We bought a couple of annuals and these: 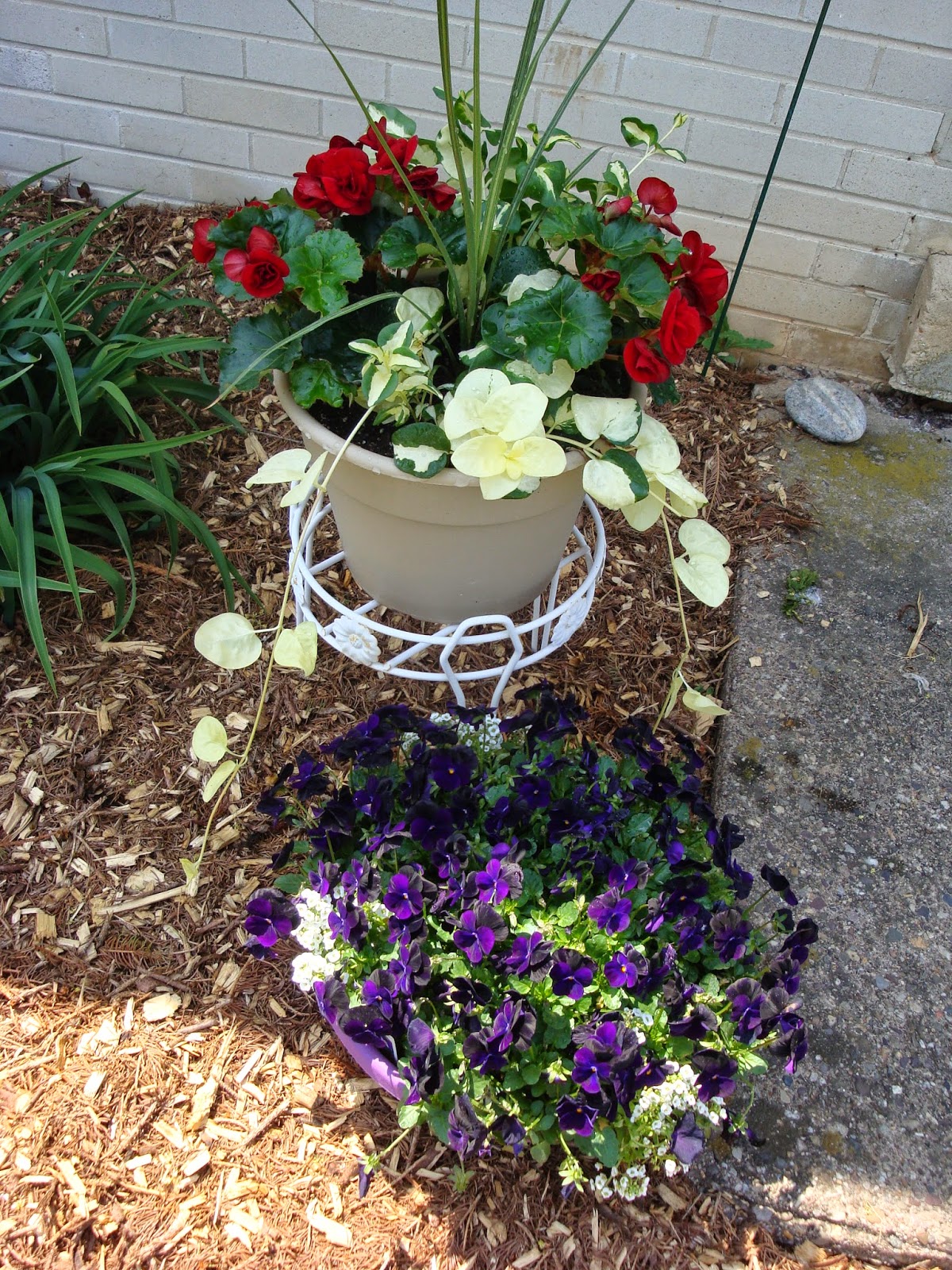 And I spent a few minutes admiring the lushness in our front bed: 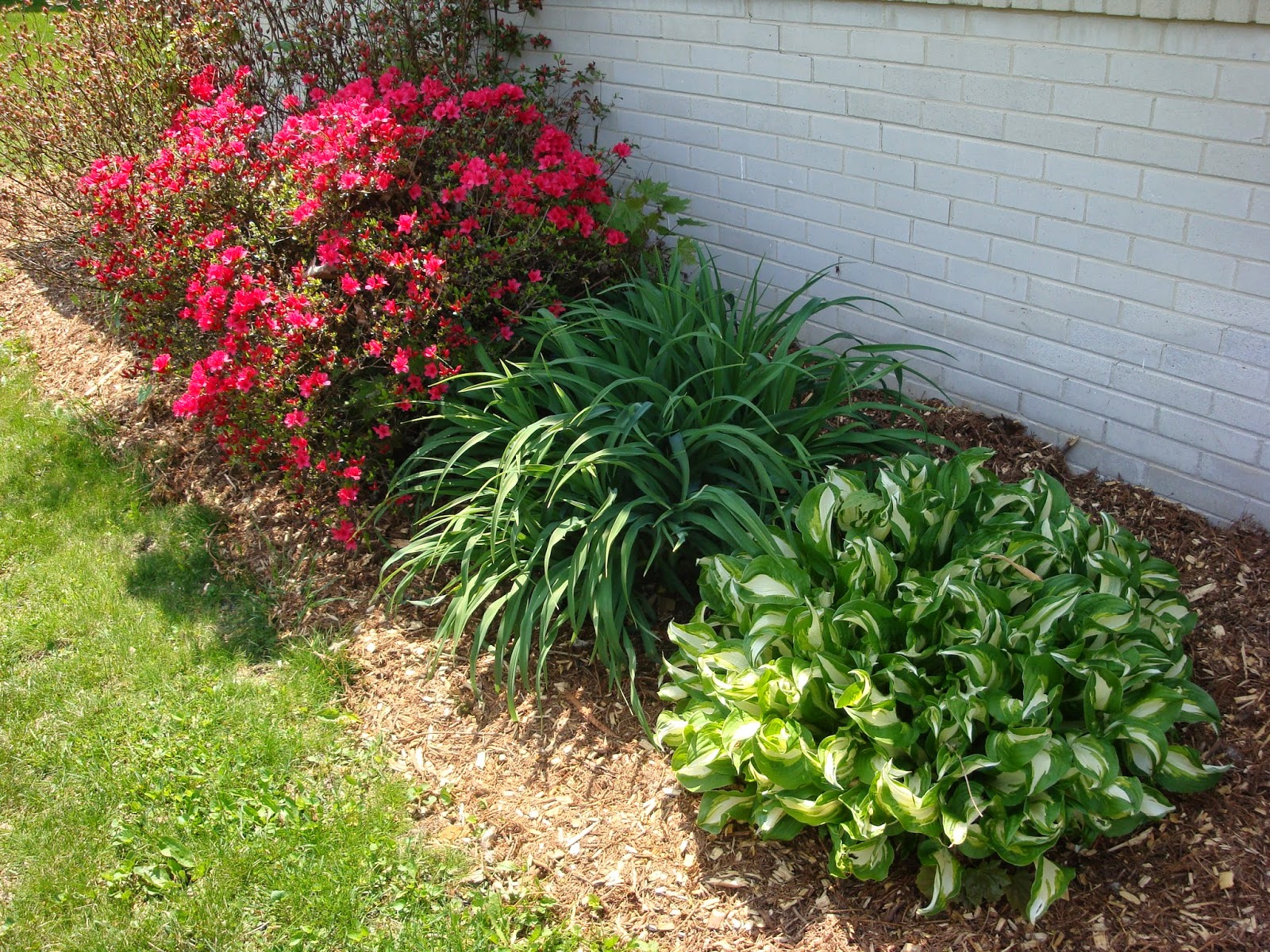 It's at least a month later than the azaleas usually bloom! But those lilies and hosta are gonna be monsters. Foy!

After I'd loaded up the car I took a spin through the trees and shrubs section of Ashcombe, which is in the parking lot. My husband was already back in his office so I was able to refrain from spending more money, but I did pick out what I want to get later this month.

I drove home with the windows all down and music blasting on the radio, me belting out "Addicted" by Kelly Clarkson (except the high parts; SO can't do those) and other rocking songs. And it happened about halfway down Lisburn Road. The "click." The moment when everything breaks open and euphoria fills me up. I finally feel unfettered and energetic, and pleeeeaaaassseeee, Mother Nature, hold off on the 85-95 degrees for a few months, okay?!