Hello there!
I know. It's been a minute, as they say. I stopped having so much to say, and social media took over the little bits I did have. And, I mean, who blogs anymore, amirite?
Well, today I do. Because I wanna. Because I connected with people here once, and after a year where people struggled to connect (or connected too much—Zoom OMG), it seemed fitting to go old-school.
(Let's see how much stale slang I can get into a blog post!)
Anyway. I wanted to post here because as much of a shitshow as 2020 was, nothing is all bad, and some things were really good. Like Enola Holmes! I loved that movie. And some of the final episodes of Supernatural. (We won't talk about which ones. We can each love our own.)
Probably because there was so much less TV overall, I read more. I'm at 146 books and counting. Jim Butcher and Susan Grant both had two releases! I absolutely adored King's Ransom by Suzanne Brockmann and A Cowboy to Remember by Rebekah Witherspoon and ohhhh, Relentless in Texas by Kari Lynn Dell was the book of the year for me, so bittersweet because she died shortly after it was released. We are so blessed to have gotten the books we did before we lost her.
There's a lot to look forward to in 2021, too, including Misty Simon's new paranormal mystery series. (See the first cover at right, and preorder here!) And WandaVision, The Falcon & the Winter Soldier, Loki, and hopefully Hawkeye. Plus SO much other Marvel content! I know we can't expect it all to be great, but I am a huge MCU fan and love the direction they're taking things. Miles Morales, Kamala Khan... Though I have to say the next Peter Parker movie stresses me out with the way the last one ended.
2020 may have been the year I traveled the least, but I still managed some. In January, I had one last quick visit with my brother and his family in Massachusetts when I brought Number Two to her internship in New Hampshire. And then...that was it for seven whole months! Until we went to pick her up in July. It was a bit of a blessing that she had the internship instead of being in school with the chaos of lockdown/quarantine. She was able to do her fall semester here at home, and will do the same for her final one before moving back to New Hampshire for work.
We had to cancel our July vacation but with the "settling" of the pandemic in the summer, we managed a trip to Williamsburg to get a break. There's a lot of outdoors stuff to do where you can stay away from people, and I got a day on the beach, which kept my soul going as things ramped up again. (And by "things" I mean both work and COVID. So much simultaneous 👍 and 👎.
One thing that didn't stop: Writing! I hit 225,000 words this year. Yes, exactly. I took a writing break in December but wrote 205 words so I could hit that mark. 🤣
I had a lot of new releases this year! 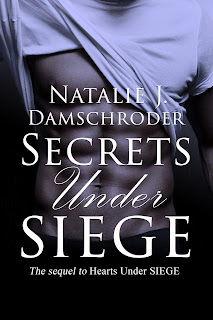 Secrets Under SIEGE is the enemies-to-lovers sequel to Hearts Under SIEGE.
It’s been 15 years since Conrad Dixson and Skye Burgeson were not-so-friendly competitors in training and five years since Dix dragged SIEGE from the rubble of corruption. When someone targets both of them personally and professionally, they struggle to overcome old trust issues and an attraction neither one has room for so they can work together to save both companies.
As their investigation shapes a puzzle they can’t make any sense of, their feelings for each other become frighteningly clear. Dix doesn’t want to fall for the smart, clever, fearless woman who could be involved in crushing the business he’s put his entire life into protecting. And Skye is terrified that letting him in will threaten the life she’s built to honor her heroic brother who died in action.
The journey leads them to a familiar enemy who’s been using prime and petty revenge motivations to cover his true purpose, escalating until threats to the people Dix and Skye love force them to face unacceptable decisions. 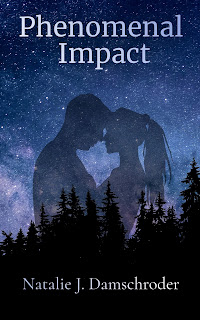 After that came Phenomenal Impact, a FREE short story that's very meta:
Oakley Commton has been cursed. After minor exposure to an unknown element mined from an asteroid, she’s suddenly aware of being a heroine in a Natalie J. Damschroder story. And she’s pissed. Learning you’re not in control of your own life would depress anyone. Plus, Damschroder writes romance, and Oakley can’t tell what trope she’s using. Friends to lovers? Alpha male? Forbidden love with the boss? The only saving grace is that when she’s assigned to a mission that could lead to her death—or worse—she knows the outcome will be success. Damschroder only writes happy endings. But she’s sure going to make it difficult to get there…
All you have to do to get this story FREE is to sign up for my newsletter by clicking this link. You don’t have to stay on the mailing list if you really don’t want to, but I promise I don’t send much e-mail. It’s the best way to keep aware of new releases, in-person and online events, etc.
Backstory: I’ve been writing for a long time. Decades. And after I settled on romantic adventure, I noticed some commonalities popping up in my stories. Then, while reading a book by an author I love, I spotted her doing  the same thing. Like, “someone says something about that in every book.” And I thought, “what if a character knew they were in a book by X author?” Okay, duh, X author would be me. I wanted to see what that would be like. So I wrote it. And it was so much fun. I hope my readers find it fun, too! 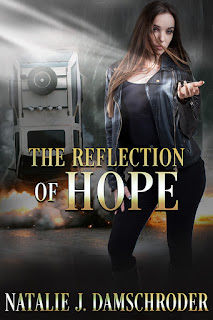 Next came The Reflection of Hope, the final book in my superhero trilogy, the CASE files. I think this could be my best book...
Vanessa Ripley (do not call her Vanessa) uses her rare combination of physical and mental super abilities only for consulting and training, staying out of the field after a catastrophic mission resulted in the death of a civilian. But now her old flame Evan Forgeron needs her help. His task force is this close to stopping the Citizens Against Superhero Existence (CASE), and he needs Ripley’s mental powers to do it.
When Evan’s in trouble she can’t say no, even if getting involved with him again threatens to tear both of them apart. Then CASE’s mission becomes intensely personal, ripping open secrets Ripley never knew existed and putting a target on Evan and every superhero in the country. If they can end CASE, she and Evan may have a chance at a future together. But if they fail, it will take everything and everyone they love.
Note: All of The CASE Files are in Kindle Unlimited!
So that got us into May... LOL I spent most of the rest of the year finishing The Solars Duology (which came out in October and November) and Phantom Power, a YA sequel to Manifest Destiny that I never realized I was going to write until I did it. LOL 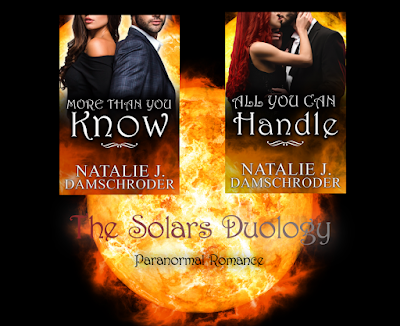 Two new stories set in a world where people have abilities connected to the sun…with frightening and dangerous side effects and challenges. 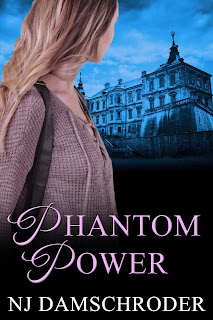 Keegan Belcastro has always loved a mystery, even when it got her into trouble. When research for a school paper leads her to a haunted mansion full of desperate phantoms, learning who they are and how they came to be trapped there evolves into a quest for their freedom.
Shane Bitrec has been Keegan’s next-door neighbor and best friend for most of her life. High school graduation is going to mean big changes that she’s been trying to prepare for all year. But drifting away hasn’t been as easy as she thought, and when Shane gets involved in her quest, it disrupts more than just her independence. Confrontation gives rise to unprecedented feelings that threaten everything they’ve meant, or could mean, to each other.
When transitioning the spirits to the afterlife proves more dangerous than Keegan expected, Shane’s constant presence becomes both a vital tool and an emotional minefield. Investigating the mansion’s darkly complicated history leads to Keegan becoming tied to the energy of the house and its phantoms. Their desperation threatens her life, and only Shane can protect her. But who will protect him?
Whew. Blogging is more tiring than I remember it being. But then, I'm nearly 50. (I've been saying that for at least a year. In 2 days I have to stop.  😜)
Okay, one last thing. 2021. I haven't set my specific goals yet, but here are a couple things I know are in store:

Yes! A literal store! Where you can order signed, personalized print books from me at prices below the cover price, and maybe some other stuff eventually, too.

My next writing project. These are my short romantic adventures. Some you may already have read. Like Phenomenal Impact, which gave me the idea. Through the Void, the ridiculously named (and soon to be re-named!) The Tempest Turtle, both of which were part of The First Sentence and The Second Sentence anthologies. But then there will be Operation: Gratitude and the one I'm working on now and the three-to-five others that already have ideas.
Adrenaline Shots are short, high-stakes, romantic, quick reads that will be only 99 cents each.

And please, have a safe and healthy holiday season and bright, hopeful new year!