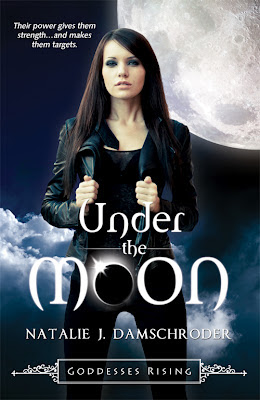 It kept all the things I loved about the original cover, and made the rest even better! What do you think?
at 8:19 PM 3 comments:

Making it Up to Jade and Praise for Patient First

@jade_kadir wasn't very happy with my bait and switch on the last post, so this picture is for her. Love you, jade! :*

~~~~~~~~~~
So all last week, I've had an atrial flutter. I had something similar before, and went to see my doc who did an EKG, found nothing, and it never happened again for over a decade. (Just like when I went to the ER for bleeding and they found nothing, sent me for a colonoscopy that was completely normal...I'm establishing a pattern!)

When the flutter kept going all week, in clusters, I decided I'd better have it checked. I don't have a family doctor, so I went over to the new Patient First facility. I was there less than an hour! They declared my oxygen perfect (100%), my pulse perfect (68), and my blood pressure perfect (118/72 or something). The EKG found nothing. The cute, charming PA asked me some questions, agreed it was probably caffeine and stress and to cut back on both, and ordered a blood test for thyroid and enzymes, just to be sure. He gave me the number for an "excellent" cardiologist in case it didn't resolve on its own and, most importantly, reassured me that this wouldn't at all interfere with my LASIK next week. (Squee! Next week!)

Everyone there was very friendly and nice and professional. The place was clean and bright and comfortable. I heartily recommend it if you have a minor emergency (cuz they always occur when the doctor's office is closed!) or if, like me, you don't have a family doctor.

Hey, guess what? I have a new cover (officially!) for Under the Moon, for its nationwide paperback release in September. Stay tuned!
at 9:13 PM 4 comments:

Ryan Reynolds in his Underwear Always Gets a Lot of Hits

I didn't really have a good title for this post, so I stuck that one up there. We'll see what happens.

So now I'm officially T-14 days and counting. I had my pre-op testing with my optometrist today. Everything looks good. Happy corneas (her words), no retinal issues. I had massive dilation (meaning I won't be back to normal for up to 6 hours instead of the usual 2). I'm at the point now where I can see okay, but my eyeballs still feel weird and light hurts. Just call me Gizmo. The good news is that my vision did change a tiny bit between non-dilation and dilation, so I get to do it again next week. Yay. (They'll probably want to check it again so they can be sure to get the best possible outcome. I'm okay with that!)

No, the really good news is that I produce tears like mad. Since my friend Cindy had a really bad dry eye experience, that was a big relief.

~~~~~~~~~~~
Hey, whose responsibility is it to fire Punxatawny Phil? I admit to being a real douche about the whole six more weeks of winter thing. Groundhog Day to the first day of official spring? Six weeks. But all that aside, this year Phil saw his shadow and proclaimed an elongated end to winter, and last week we hit record-setting highs. We're about to again tomorrow, but that's okay since it's actually spring now.

I know other parts of the country have still been unseasonably cold and even had snow, but Phil is in Pennsylvania, so that's what counts.

J hates movie crowds as much as I hate festival and park crowds, so we're going to an 11:00 a.m. show on Saturday. I had a discussion on my other blog about high expectations for this movie. Most people are trying to keep them low, but I can't help it. Mine are soaring. I can't wait!

~~~~~~~~~~~
My editor just told me about Teavana. I'm normally a pretty basic tea person, but I've already spent way too long at that site going "ooh! ooh! look! ooh!" and making notes for Mother's Day gifts. LOL I'd love some recommendations, though she's already given me enough to kill my budget for a year.

It has been one crappy week, and the worst may be yet to come. Hopefully not. Hopefully, in 2 hours and 20 minutes it will become magically awesome.

In the meantime, I'm compelled to sing the praises of some people who mightily deserve it.

There's a lot of bitching about the US Postal Service and the ongoing budget woes. But honestly, I think they do an amazing job for 45-freaking-cents. Number One lost her iPod recently and ordered a replacement online on Monday. It was expected to arrive on Friday, which bummed her out, but it ended up being delivered today. Since we ordered late Monday, figure it shipped yesterday, and took one day to arrive in central PA in perfect condition, all the way from Boca Raton, FL.

When the mail carrier came to the door to get my signature for the package, we chatted for a while. He's retired and works as a sub, but ends up doing two routes a day, five days a week many weeks. The USPS has cut staff and won't hire replacements, and of course the delivery people do all their own sorting, too. So thank you, USPS workers! You're awesome!

I've been aware of Etsy for a while, but I don't have much need for jewelry or fancy diaper covers, so I never really explored the marketplace and hadn't bought anything there. My awesome publicist, Roxanne Rhoads, suggested I do a search there for items for the Goddess Society gift basket I'm donating to the Brenda Novak Auction for the Cure of Diabetes. I knew they'd have good quality for great prices, but was skeptical that I'd find anything relevant without a lot of hard work with the search box.

But WOW was I wrong. I found three perfect items (a goddess pendant, full-moon earrings, and goddess sea salt and essential oil scrub) within minutes. Two have already arrived, and they were beautifully packaged with very nice notes. I'm so impressed with the earrings I might see if I can get another pair.

Your turn! Whose praises do you want to sing today?
at 3:19 PM 2 comments:

Congratulations to Nikki, who was chosen via random.org as the prize winner! Thanks everyone for participating, and good luck with the prizes at the other blog's and the rest of Barbara's party!


The anniversary party paranormal day theme is Transylvania. That is all well and good for people like Lisa, whose characters are vampires. But how could I tie my goddesses in?

Uh...how about by talking about Hungarian goddesses? Yeah, I was amazed by the obviousness, too. Only took me four-point-seven minutes to think of it.

So Hungarian mythology is not, I think, all that well known in the United States. Certainly not as well known as Greek/Roman and Viking mythology. But in all fairness, it's hard to name superheroes and comic book characters after Boldogasszony (goddess of motherhood) or Boszorkány (a supernatural witch, she'd play the villain in a comic book). Those names don't roll off the tongue of non-Hungarians. (Note: time-limited research is from that unreliable cauldron of interesting stuff, Wikipedia.)

Hungarian myth is heavy on the gods, and even heavier on demons. But it's entirely possible that some of my Goddesses Rising have this ancestry. Not that they know it. It's kind of hard to do genealogy that far back, so no modern goddesses know exactly from whom they're descended.

Transylvania has a dark and moody reputation, but honestly, it's gorgeous country. I mean, look at this!

Who wouldn't want to visit there? During the day, you can hike in the gorgeousness, meet friendly locals, and collect unique memorabilia. At night, the looming hills and fog and shadows will cloak the vamps and demons the region is famous for. Best of everything!

Have you ever been to Transylvania, or any other part of the country? What part of the world do you associate with the supernatural? Comment here to WIN a copy of Megan Hart's Collide and an Under the Moon coffee mug (with a couple of other seekrit goodies thrown in). Don't forget to go to Barbara Vey's blog party for a chance to win the BIG prizes, and hop on over to my fellow authors' blogs for chances to win additional goodies. Have fun!
at 12:01 AM 20 comments: