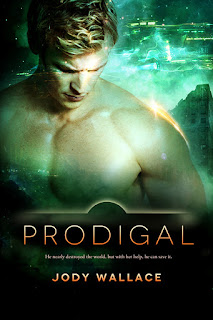 If angels were aliens and sentient computers were good guys and the super hot Chosen One movie star failed to save the world and then got amnesia and there was an apocalypse...what was I talking about? Oh! PRODIGAL, book 3 of the Maelstrom Chronicles, is a gritty, action-packed, surprisingly humorous examination of the relationship between a kick-ass lady sheriff and the Hollywood hunk who nearly destroyed the world. Together, can they reverse the course of history?

I recently messaged Natalie (thank you for hosting me!) about what I should talk about on her blog. Although she had given me a list of things to talk about on her blog already – such as how to redeem “unheroic” characters from earlier books, like Adam Alsing – I decided to run some other ideas by her anyway. Some of the ideas she vetoed were:

1) Why in the world menopause has to be so difficult and gross.

2) How Natalie should get a bunch of cats and set up a cat sanctuary now that she’s soon to be an empty nester.

3) If I should crochet a toilet or a poop emoji as a blog tour giveaway.

4) If we should just post the conversation we just had about graphically described lady issues and lose all our readers, because hey, we’d already had it, and it was spelled correctly, and the work would already be done.

6) What she’s writing or publishing next (She’s working on three books at once! While I can barely work on one interview at a time! Go Natalie!)

7) Why I can’t keep tomatoes alive on my back porch.

9) How much we both loved the new Ghostbusters – okay, that would be a fun article, but I guess it’s not great promo for a book I just released.

10) Does she think it’s low-class that we just have our box springs and mattresses on the floor so the dang cats won’t climb up in the box springs and make a bunch of noise while we’re trying to sleep? (She pointed out this question didn’t go well with me nagging her about the cat sanctuary.)

By the way, the method I chose to redeem Adam Alsing, the failed Chosen One who sort of caused the apocalypse in the beginning of the Maelstrom Chronicles (ANGELI), was to give him complete amnesia and a role to play in saving the world. PRODIGAL wraps up the three books in a semi-trilogy fashion. Other authors may not have to take such drastic methods to redeem antiheroes, but I’d never written an amnesia subplot before and I thought it was time to try one.

Oddly enough, I have done my take on a “secret baby” plot, and the mother is the heroine of PRODIGAL! PRODIGAL itself doesn’t revolve around the secret baby issue, though. By this book, Claire is great friends with the wife (Sarah) of her ex (Nikolas) and is completely happy for the three of them to split parenting duties for the kiddo.

As for why you should read this book since this is supposed to encourage you to read PRODIGAL, I’d just say there are no people in here complaining about menopause, there is a cat, there is a lot of adventure, love and excitement, and I think people who enjoyed the new Ghostbusters will enjoy how strong and confident the heroine, Claire Lawson, is, as well as how charming and perfectly suited to her the hero, Adam Alsing, is. The two of them together—and how they negotiate a romance while the world might be ending, is the core of the story and the reason why I chose the post-apocalyptic setting.

Plus I like to make stuff up about monsters.


He nearly destroyed the world, but with her help, he can save it.

Adam Alsing—at least that’s what they tell him his name is—has no idea who he is or why he’s huddled naked in the snow next to a mysterious silver pod. When a gorgeous, no-nonsense sheriff by the name of Claire Lawson rescues him, she explains the planet’s under attack—and he’s been missing for over two years. The problem is, what he doesn’t remember can kill them.

Keeping the peace in her post-apocalyptic town is all the trouble Sheriff Claire Lawson can handle. Until the MIA Chosen One—the guy who could have prevented the apocalypse—interrupts her supply run. The Shipborn aliens want to study him, and what’s left of the Terran government wants to lock him up. But his charming demeanor and his desire to help, along with his sexy smile, has Claire fighting her better judgment to keep Adam around. For now.

Read the Excerpt below! Also, add the book to your Goodreads To-Read shelf!