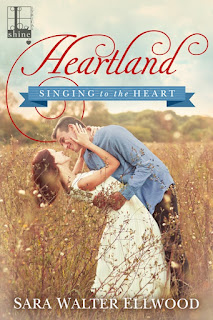 Heartland
Singing to the Heart Book 3
by Sara Walter Ellwood

Sex, drugs, and country music. That was the lifestyle for Emily Kendall, a Texas girl who hit it big on the country music charts—until she found herself pregnant and battling addiction. Now out of rehab and seeking a new life for herself and her unborn child, Emily returns to her hometown of McAllister. The last thing she’s looking for is trouble, no matter how good it looks in uniform…
A widower, single father, and former Army Ranger struggling with PTSD, Sheriff EJ Cowley has his own demons to battle while keeping folks safe. The last thing he needs is a troubled celebrity speeding through town in her bright red Maserati. But when someone from Emily’s past threatens her safety and the peace of McAllister, EJ has no choice but to protect her. And soon both will learn there’s more to the other than meets the eye. And that wounded hearts can love again…

Excerpt:
“I’m sorry, but I can’t ride you right now.” Emily kissed the horse above her nose, and Tink nuzzled her cheek. “We’ll go out tomorrow. How about that?”

“I remember when you rode that horse everywhere you went.”

Startled by the deep voice, she turned. EJ Cowley leaned on the top rail of the fence, and from the look of it, he’d been there for a while. He’d changed out of the brown uniform of the McAllister County sheriff’s department. She couldn’t help looking him over. Dressed in worn boots, faded jeans, a blue western shirt, and a brown Stetson, he epitomized every sexy cliché existing about how a cowboy should look.

Her heart sped up at the way those clothes fit him. Which irritated the hell out of her. She turned back to her horse and stroked her long face. “What are you doing here?”

“My sister-in-law watches my son while I’m at work.”

She stilled. Had she been quasi-lusting after a married man? Hadn’t he married Raquel Marshall? She glanced over her shoulder at his left hand. No ring. But then a lot of cowboys didn’t wear their wedding bands when they were working. The risk of getting it caught on something was too great.

Despite his clothes, he must have come off duty as the county’s ticket-happy sheriff not too long ago. She patted Tink’s shoulder. “See you in the morning, girl.” As she headed toward the man, who was not hiding the fact he appreciated what he saw, she guessed he wasn’t still married, but she’d been around the world a few times and knew not to take a man’s blatant interest as proof of anything. “You have a son. How is Raquel these days?”

She was close enough to notice his gray eyes had turned as haunted as a gravestone when she asked about his wife. He looked to the left, toward his brother’s house, and from the way a muscle twitched in his jaw, he must have gritted his teeth.

“Oh… I’m sorry. I didn’t know,” she stammered. What else had happened to the people she’d once considered friends she was unaware of? “How old is your little boy?”

He took a deep breath and met her gaze again. She studied his eyes as they moved over her face. God, he had the most fascinating eyes. They weren’t truly blue, but the gray was an odd shade. Too light to be slate, but too dark to be silver. They reminded her of her great-grandmother’s pewter candleholders.

As silence engulfed them, she turned to head for the gate. She had no idea what was up with the sheriff, and she didn’t like her desire to ask. EJ Cowley may have filled her schoolgirl fantasies, but she wasn’t the wide-eyed kid who crushed after the local cowboy-turned-soldier.

At the sound of her name, she glanced past EJ to the porch. Johnny stood there with his toy lightsaber and x-wing. She promised to play a video game with her brother. “Well, it was good seeing you again, EJ.”

She was halfway across the drive when his voice stopped her. “By the way”--He cleared his throat--“I lost your ticket...”

Stopping in the middle of the driveway, she looked over her shoulder at him. His face puckered as if he’d eaten a lemon soaked in vinegar. He took his hat off and ran a hand through his short hair. The setting sun turned the tresses a gleaming gold.

“You lost it?” Damned if she’d make it easy on him. “After going through all the trouble of stopping me a mile away from home?”

Setting his hat back on his head, he cleared his throat again and stood with his feet apart. He gave a quick jerk with his head in the affirmative. “Can’t find it anywhere. No ticket. No proof. You’re off the hook.”

Holy crap, he was gorgeous, and heat flooded her to pool in her belly. She turned, not wanting him to see the way he affected her, and headed for the porch, then lied through her teeth. “Good, because I’ve already tossed it.” She had every intention of paying the fine, but she was glad he lost the ticket. No decent cop would lose a ticket. Maybe he did it out of remembrance of their childhood friendship. Or was he as attracted to her as she was to him?

With an inward shake of herself, she didn’t let a possible answer formulate in her muddled brain. She couldn’t be anything to him. You’re pregnant with another man’s child and don’t need the added stress! At the door into the kitchen, she ruffled Johnny’s hair and turned, ignoring her self-admonishment. “See you around, EJ.”

“Yeah… See you around.” He tipped his hat and turned on his heel to amble toward his extended cab Silverado.

From inside the screen door, she watched the way he filled out the backside of his Wrangler’s and muttered, “Hell yeah, I hope so.”


If you’d like to see more excerpts, check them out here. 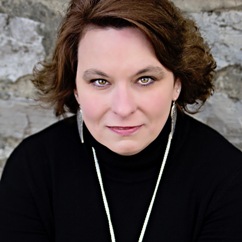 About the Author:
Although Sara Walter Ellwood has long ago left the farm for the glamour of the big town, she draws on her experiences growing up on a small hobby farm in West Central Pennsylvania to write her contemporary westerns. She’s been married to her college sweetheart for over 20 years, and they have two teenagers and one very spoiled rescue cat named Penny. She longs to visit the places she writes about and jokes she’s a cowgirl at heart stuck in Pennsylvania suburbia. Sara Walter Ellwood is a multi-published and international Amazon bestselling author of the anthology set Cowboy Up. She also dabbles in the paranormal genre with her The Hunter’s Dagger Series, which was previously published under the pen name Cera duBois.

The other books in Singing to the Heart…

Heartstrings, Book 1, and Heartsong, Book 2, are also available in ebook and print!


Heartstrings on Amazon | Heartsong on Amazon


For other vendor links and book information check out my website page.
at 12:30 AM No comments:

Those Damned Teenagers, or, Get Your Own Damned Sunflower Seeds

Spring, the time of birth. We successfully kept Laverne, the prolific mama mourning dove from nesting on our ladder this year by taking down the ladder. We put it back up after we were sure she'd nested somewhere else, and a few weeks later...Shirley was back. You remember Shirley, she was the high-strung robin that nested on the ladder with Laverne a couple of years ago. So now we have to wait for Shirley's eggs to hatch before I can do the gutters. Again.

Anyway, we also have a starling family running around. There are two adults and two fledglings. The fledglings have this horrible screechy call and it's pretty non-stop. My husband noticed them on our feeder one day, and how the parent was feeding the fledglings. I explained that after they fledge, it's a learning period where they still get fed by the parents. He was like, "but they're so BIG." I joked that they're just like today's teenagers/twenty-somethings: perfectly capable of taking care of themselves, but still demanding the parents do it for them.

That was a couple of weeks ago. Today, they were running around outside my window again, with a change in dynamic. The parents were eating seeds off the ground...and NOT feeding the "youngsters." Which are now easily twice the size of the parents.

Now, I'm not a passionate birder. I retain knowledge (I think) from my summer as a naturalist intern and my zoology class in college. I started to think these "fledglings" are cowbirds. The brown-headed cowbird is a parasite. It lays its eggs in OTHER birds' nests, and the cowbirds, being bigger and more aggressive, can often cause the other babies to...well, you can imagine. But the coloring is definitely more starling than cowbird, so maybe they just look so much bigger because they haven't molted yet or whatever. Or maybe the parents did such a good job with the feeding that they grew really big.

I felt really bad for the parents, though, because they looked pretty done with the whole thing. Kinda like human parents, in a lot of cases. :)

(I tried to get photos/video, but they've disappeared. I know if I keep waiting to post this, they'll never show up. So here's my cat watching a chipmunk instead. :) ) 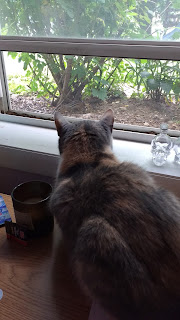