It's No Fun When They Don't Play Along

Ref. last post, about needing something fun to watch? I have Part 1 of Dragon Riders of Berk that my friend Gail sent me! I keep forgetting to ask Number One if she wants to watch it with me. I think I'll just do it, starting tonight. If I'm not working until midnight again.
My husband has a lot of fun with telemarketers and wrong numbers and stuff like that. Our number is only 1 digit different from the local Domino's number, and people used to always call and ask if we were Pizza Hut, or would immediately launch into their order or request for delivery, even though we hadn't answered "properly." He'd say we were out of pizza or that we were Little Cesar's or something like that. They moved across town, out of our area, and now a) they won't deliver to us and b) we don't get calls for them anymore. That's NOT a good trade.

You know those people who call you and say they're from Geek Support and there's something really wrong with your computer and they want to help you? I kept one of those guys on the phone for 20 minutes. At one point he told me his company's address in Connecticut and I went on about how I used to live up there and asking if he'd seen certain sites. I told him I didn't want to go downstairs and boot up my computer. He passed judgment on my being in bed at that time of the morning, even though I hadn't said I was in bed, I said I was in my bedroom. That was a fun conversation. He tried so hard!

Anyway, today I got a friend request on Facebook. I always say yes. This person immediately messaged me privately. Red flag, right? It went like this:

She hasn't responded. So boring. *sigh*

How have YOU tried to play with someone lately? Did they play along?
at 12:58 PM 8 comments:

I have never (or at least for a decade or two) gone for darkness in my entertainment. I tend to prefer light paranormal and romantic adventure over dark paranormal romances or urban fantasy or suspense. My husband can't drag me unconscious to a horror movie. And when I tried watching Daredevil on Netflix recently, I couldn't watch past the episode where the bad guy decapitated someone by bashing a car door against his head. For, like, 5 minutes. 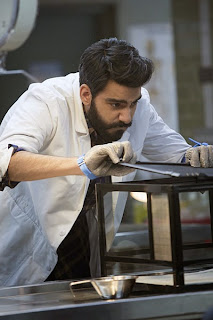 Lately, though, I've gotten myself into some pretty dark stuff. Like iZombie. It didn't start out dark. I mean, as far as zombie fiction goes, it was cool. The heroine is focused on hiding her condition and getting along without going full-on zombie. But they couldn't leave it as "she's the only zombie who survived." No, the last episode I watched (we're still behind) ended with her finding out her hunky British rock star boyfriend, who has spiced up that screen by a LOT, has been not only been buying brains from the evil guy (normally yummy David Anders; why does he have to be evil AGAIN?!) who is abducting and murdering kids to feed his zombie customers and make tons of money...the kid they are eating is the one her ex-fiancé Major cared so much about that he got beaten up twice and lost his job. And I know what's coming for Lowell. As if THAT'S not enough, Liv's only real supporter is Ravi, her boss, who's trying to find a cure. And he got BITTEN BY A ZOMBIE RAT. I am so freaking sad for him.

So that wasn't too dark by itself. But it ended ominously. My Outlander, and I love it—except the most recent episode about killed me. We watched it right after iZombie, so I insisted we watch Modern Family to cleanse my brain. I'll watch the finale because of Jamie, but I'm NOT looking forward to it. 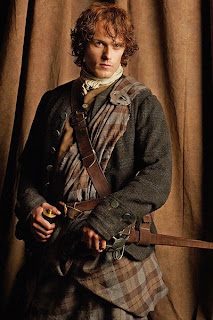 friend Gail has talked me into trying

Then there was Supernatural. Always kind of dark, but unique. Until this year's finale, in which Dean gives up, makes a deal to kill his brother and go somewhere unreachable for eternity, and then fails, kills Death (nooooo, Julian Richings!!!!), and has the Mark removed, thereby unleashing The Darkness—the evil that came before us, that God and his archangels battled back and trapped. The Mark was the key. So now they've unleashed this Darkness. Can you GET any bleaker?

I'd be so ready for light summer fare, if there was any. Franklin & Bash is no more, and Covert Affairs has also been canceled. Thank God for Royal Pains starting in a couple of weeks. But the other shows I watch in the summer are The Last Ship—about the only people who have survived a worldwide plague—and Falling Skies—about the only people who have survived an alien invasion. Nothing light and fun there! I have Dark Matter on the "new show" list, but anything whose trailer ends with "Because we're dangerous" is unlikely to be a laugh a minute.

So I might have to find something I can get on DVD from the library and binge-watch. Any suggestions?