Number One and her father—and, to a lesser extent, Number Two—are obsessed with "boonies." That's bunnies with an oon sound instead of an un sound. They search for them every time we pull onto our street, and squeal when one is spotted in our yard.

Several weeks ago, we saw a boonie preparing a nest smack in the middle of the back yard. 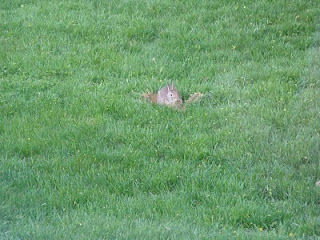 She packed dry grass and fur into it and went to the other side of the yard. A few days later, the grass and fur had been scattered. We haven't seen much activity since, but in the interest of being on the safe side, they created the Circle of Bunnitude (pronounced "Boon-i-tood"). 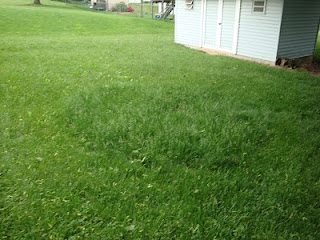 That was taken a couple of weeks ago. The grass is taller now. Around that time, the neighbor's old dog came exploring and I caught her nosing in the nest. I think her owner got her before she really did more than nose, and we haven't seen any signs of trauma. Nor have we seen baby boonies. Though we didn't know we had them before, not until Dolly started playing with one.

A younger-looking but full-grown boonie was hopping the perimeter of the Circle of Bunnitude last night, but I have no idea how long it takes boonies to grow to full size (probably longer than it's been) and the neighborhood is rife with them, so it could have been any boonie.

So now we have to decide: let the Circle of Bunnitude get out of control, or risk running over something with the lawn mower? Number One usually does the mowing nowadays, and last year she almost ran over a nest in a different part of the yard, so I know what her vote is going to be.

I guess I should invest in a machete. 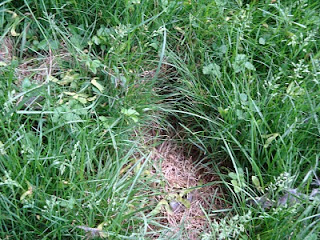 Baby bunnies are one of the cutest of the baby world. I think it's the ears. I love them.

Bunny probably found a safer place to make her nest, instead of out in the open.

They are! The one Dolly started tossing around fit perfectly in the palm of my hand, and they're SO soft!

Bunny(ies) have made their nests out in the open of our yard many times before, though. (I should clarify: "nest" = "burrow"--they're dug into the ground.)

My eldest just graduated from the same university I went to in the late seventies/early eighties. I lived on campus for two years and didn't see a single rabbit. The campus is now overrun with rabbits. They moved in at some point - people dropping them off? - and the population has exploded. Yes, they are cute, but still...

Overpopulation of anything isn't good, but at least it's not, like, rats! LOL