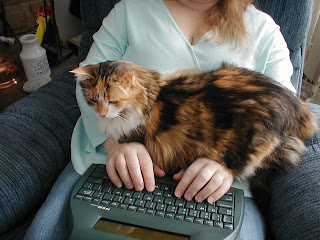 In June of 2006 I was browsing cat shelter listings online, because a coworker was looking for a new cat. This long-hair with a curled ear caught my eye. First, because we'd adopted one cat already and finding a long-hair at a shelter was impossible at the time. Second, because our dog had ear issues, and we got the first cat as a companion for her and joked that maybe she'd clean the dog's ears. She didn't, and she had ear issues of her own. Plus, she matched the other two, color-wise. So she seemed destined for us.

Mostly, though, her story pierced me. The shelter had named her Frisbee because the person who brought her in had witnessed her tossed from the window of a moving truck. Awfulness and awesomeness all at once.

We brought her home. She hated us. She'd slice our legs when we walked by, bite if we pet her the wrong way, and walk around hissing and growling just out of orneryness. We called her Demon Cat. But slowly she mellowed. She started hanging out with us. Licking my husband's face, and curling up on my lap while I read (or wrote). She sat in the window and acted as town crier, announcing when each of our neighbors got home and then, with a very different cry, when one of us did.

The shelter had listed her as 2 years old in 2006. That would make her 9 now, but a couple of years ago, when she was diagnosed hyperthyroid, we knew that couldn't be right. I guess "2 years old" is code for "we have no freaking idea." She's at least 13, possibly much older.

A little while ago, she went blind suddenly. High blood pressure (not really measurable without invasive testing, bad at her age) or a stroke were the likely causes. Her vision came and went since then, but she gained a little weight. Then she lost it. And continued losing it, and went more fully blind. About a week ago she stopped eating and developed an upper respiratory infection. In two days she went skeletal, and spent all her time creeping around in a hunched posture. She wouldn't lie down, was clearly uncomfortable being held, and had increasing trouble breathing.

We weighed all the factors, and came to the conclusion that she probably wasn't going to get any better, even if we spend a lot of money trying. So as of half an hour ago, she's no longer suffering.

Sorry for your loss. Frisbee was lucky to have the years with you.

I'm so sorry, Natalie! You gave her a good life!

RIP Frisbee, So glad Natalie gave you a great home, You were a pretty kitty

Losing a pet is so hard, Natalie. You are in my prayers.

Thank you, Tammy and Whisk!

The other two cats didn't seem to notice last night, but they're kind of freaking out today.

Ohhh, poor little cats. We have two dogs and I never had two before together. Well, back when I was kid, but I don't really remember what it was like when the one died first.

A friend was telling me yesterday about her cat roaming the house wailing when the other cat died, but these two seem to have adapted just fine after that initial annoyance. I'm pretty sure it was just about the food. LOL