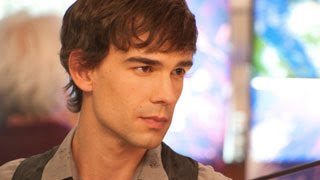 Auggie embodies both physical and emotional courage. (Most of the time—more on that later). He was blinded on the job, and now serves as the technical expert in Annie’s division. He’s a former soldier, whip smart, sweet and welcoming—a good friend to Annie in a world where friends are hard to identify. But he’s also much more.

It takes a lot of courage to keep working in a world that incapacitated you, sitting a desk when you want to be in the field, being reminded every day of what was done to you. What you’ve lost.

It takes courage to put yourself out in the field despite both your handicap and the rules you’re required to work under. More courage to be responsible for the safety of your old team when you can’t see, and can’t be there to help them directly. 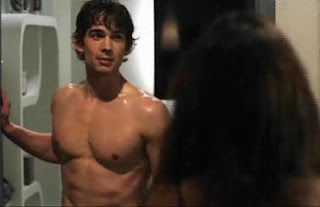 Auggie has the typical courage of an agent, going undercover as a reporter’s lover to try to determine who her informant is. But that’s where his courage ends. He uses his charm and his talents and his blindness to live a playboy’s life, one-night stands and superficial relationships a shield against true emotional connection. Or so it seems.

We learned late in the season that he guards himself because he still loves a woman from his past. He’s willing to throw away everything to protect her. That kind of courage is catnip for women who go for guys like Auggie. (Except I’d like him to wind up with Annie eventually, though there’s no hint of that possibility so far.)

Auggie’s a pretty rare character, an adventure-hound super-spy with a severe handicap. Who else is out there like Auggie? (I may have to comment on this post myself, as I can think of another one with an even less common handicap. I think MJ might jump in and name him, though… :) ) Remember, commenters can win a $25 gift certificate to the bookstore of their choice.

I've never seen this show, but will have to check it out. He sounds like the perfect hero - handsome, smart, adventurous, but with issues.

I completely love the show and I think you're right about Auggie being one of the best parts of it. He's got a devil may care attitude that hides a deeper caution about certain things in life. I kind of want to see him with Annie too, but I think he's firmly in the "friend" category for right now.

I've never even heard of the show. I don't watch much tv. I'll have to look for it. I actually recognize the actor, though I can't think of where. Thanks for an interesting post.

I know I don't watch much tv, but why have I never seen that boy before? You'd think they'd slap that photo of him all over the place!

He sounds like a really good character. Your description makes me want to seek out the show. (The picture of him shirtless didn't hurt either.) ;)

Jade, yeah, Annie has enough romantic entanglements. :) I'm content to have them be friends for a good long time.

Jen and Ava, he was in Jake 2.0 (another great show, with a geek analyst infected with nanites that gives him his chance to be a spy--kind of the groundbreaker for Chuck and I liked Jake better) and he was in Ugly Betty, too.

Ava, there was an entire episode where he was mostly naked like that. :)

Yes, he's a great character, and I can't wait to see more of him! If you'll pardon the saying, of course ...