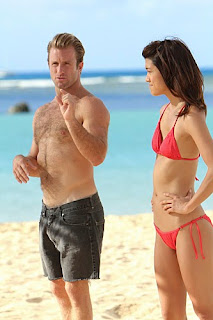 The best heroes in fiction embody more than one heroic trait, but there’s usually one that’s stronger than all the others, that runs core deep in the character. It’s always a strength, but it’s often also a flaw.

I love Danny Williams, aka Danno, on Hawaii Five-0. I love all the characters, but he’s what keeps me coming back each week, and it’s because of his sense of responsibility.

Yeah, okay, all of the members of Five-0 have that trait. Chin’s led him to leave the woman he loved to protect her, and to fight for his work even when those around him betrayed him. Steve’s a Navy SEAL—how much more driven by responsibility can you get? And even Kono takes it very hard when she believes she made a mistake, feeling responsible for letting the kidnapper/beheader go in an episode back in January.

But Danno really embodies the trait. There are millions of single dads out there, far too many of whom fail their kids in one way or another. Not Danny. He left his home in New Jersey for what might as well be another planet for how well he fits in on the island, just to be near his daughter.

And boy, does he love Grace. He didn’t become a cop because of her, but she’s why he’s one now. He wants the world to be safe for her, and he’ll personally ensure that it is. His dedication to doing things by the book (well, at least close to the book) is to provide a framework for order and security.

”His idea of communication is dropping a witty one-liner and shooting you in the face.”

That dedication is the cause of most of the friction between Danny and his partner, Steve. Steve is hot-headed and impulsive. He’ll jump into any situation without regard for his own safety or many regulations—and without regret, too. Danny’s steady and assessing. He’s never afraid to leap into the fray, but he’ll make sure to catalog all the variables first. What I love is that despite all the bickering between them, they have a core of respect and trust that makes them function as a perfect team. 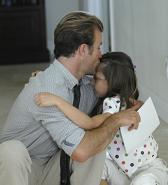 And to me, he’s just as hot hugging Grace and bickering with Steve as he is rolling out of a moving vehicle, weapon at the ready.

Danno: Oh! Whoa! Whoa! What the hell are you doing?
McGarrett: Probable cause. We were just doing a thing. I thought...
Danno: I meant we could get a key from the manager, you Neanderthal animal.


So what do you think? Agree about Danno? Disagree? What other heroes embody the trait of responsibility? Anyone you name will be added to the showdown at the end of the month, AND, every commenter (anywhere this full blog post appears) will be entered into a drawing for a $25 Amazon gift certificate!

Have not watched the show, but it sounds like I should. He sounds like a good hero - all the caring for his daughter, thoughtful, but ready to do what's necessary too. Thanks for the insights.

For a true hero a bit of distance helps to suspend disbelief...or rather makes you believe in redemption and reformation of a character...that's why the best heroes will always be found in historical romance as far as I;m concerned. But I'm always open to new suggestions....

I think you'd like it, Vicky. It's funny and fast-paced and the actors have tons of chemistry.

Interesting perspective, Grace. I can definitely see how that distance (viewpoint on the past) would feed belief. Thanks for commenting! :)

Your books sounds fabulous and I think Danno is cool. You don't need to enter me in the contest. Good luck people!

Two of my favorite TV heroes right now are pretty much the epitome of irresponsibility...House and Castle. And yet...both are good guys, dedicated to what matters most to them and responsible in their fashion.

But probably the most responsible TV character I watch: The Good Wife!

LOL, Taryn, about the epitome of irresponsibility. I don't want House, but I love Castle. The funny thing is that he has this reputation for being irresponsible, but the reality doesn't really reflect it. How could he have raised such a fantastic daughter if he wasn't responsible? Or written so many books, and built such a great career? It's all flash and charm. :)

LOL about The Good Wife. I won't pit her against the heroes in the showdown. She'd slaughter them all! :)