I originally said I was going to write this post, but I wasn't sure I could do it justice. I wrote all my other posts a month ahead of time, but couldn't quite wrap my head around this one. I almost considered writing about another fictional hero, instead. Then two things happened.

Last week, a house very close to mine caught fire. It was the first time I've ever seen real-life firefighters and EMTs at work, the first time a tragedy like this has happened in front of me. The house was fully engulfed before they arrived, and I don't think the person who made it out ever had a chance. So there was no dashing-through-the-flames and triumphant rescue.

But that didn't change the fact that those 30+ firefighters are heroes. They were mostly volunteer, and came with the expectation of putting their lives on the line. All our traits—responsibility, dedication to doing the right thing, leadership, and courage, were on display at that site.

The other event, of course, was the disaster in Japan. Hundreds of stories of heroes come out of a situation like that, but the biggest one is the nuclear reactor. What a horrifying situation. My heart aches for those employees who are willing to give up their lives to make the world a safer place for their families and loved ones, and for all of THEIR families and loved ones, and so on. Their courage is boundless, and I have no doubt that somewhere in there is an incredible leader.

We like to talk about fictional heroes because we can get "close" to them. The medium (film or page) gives us insight into their personalities, their goals and motivations, and gives us room to fantasize about living in their worlds. Real-life heroes are different. Some of them aren't the kinds of people we'd want to spend any time with, while others become heroes with such quiet strength most of us aren't even aware of them. But in The Month of the Hero, they deserve the spot at the top.

MJ and I thank everyone who read our posts this month, and extra thanks go to those who commented. Come back next week to vote in the showdown, pitting all our heroes against each other! We'll have daily polls until we get to a winner.

We'll announce our fourth and final $25 gift card winner this weekend, so be sure to check back.

And don't forget to purchase Fight or Flight on Monday, from Carina Press, Amazon orBarnes & Noble, or wherever e-books are sold. It's also available in audiobook! 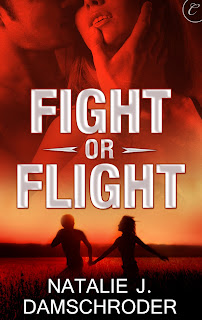 Email ThisBlogThis!Share to TwitterShare to FacebookShare to Pinterest
Labels: Month of the Hero

:::sniff::: GREAT post to wrap up our month of heroes, Natalie!

Thanks, MJ! I've had a total blast doing this with you!

My uncle and cousin are firefighters in Tulsa. I can tell you from personal experience that everyone has a "what if something bad happens" thought in the back of their heads at all times. Anyone that runs into a burning building or puts themselves in harms way to protect another person is a super hero in my opinion.

Stacie, next time you talk to them, give them a thanks from me.

I think anyone who is WILLING to put their life on the line in those (and other) circumstances is a hero, even if they never have to follow through.

There are so many heroes who do their jobs quietly and without thanks each day. I was at a school program today and realized what a miracle truly dedicated teachers can be. They can change a child's life. I think dedicated teachers are heroes.

Definitely, Jen! I've said many a prayer of thanks over some of the teachers my kids have had.