The Ultimate Leader: Doctor Who

On the opposite end of the spectrum from reluctant leader Jack Shephard from LOST is the Doctor from Doctor Who. 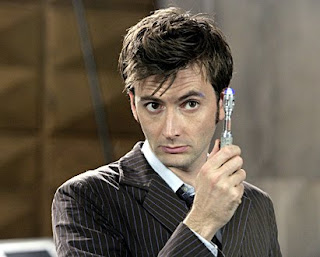 The Doctor is perhaps the most powerful being in the universe. His intelligence and knowledge are unfathomable. He can travel through time and space, and change both. He and his living spaceship, the TARDIS, are drawn to times and places of need—of disaster and suffering. And always, the Doctor saves (most of) the people.

The great thing about the Doctor is that he embraces his role with delight. He doesn’t resent the burdens placed on him by his heritage and his circumstances. He’s excited by every adventure, every challenge.

Amazingly, he has no superiority complex about his superiority. He makes no bones about being the smartest being in the room, but he’s so matter of fact and fun about it, no one takes offense. He also doesn’t consider himself infallible. He delights as much in an idea from a regular human as he does in his own brilliance. He involves everyone around him—the ones who are capable, anyway, because he doesn’t suffer fools, either—and solves the problem.

There are times, though, that he can’t save everyone. He recognizes it, and laments it, and most of the time accepts it. His is a lonely existence, though, and the burden wears on him. That’s why he seeks companions—to ground him, and help him stay connected to those who need him. To keep him from becoming so jaded and cynical that he stops caring, stops helping. 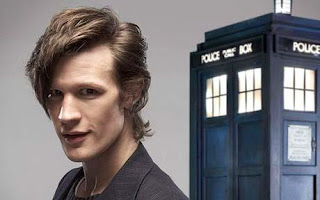 His never-ending quest to keep the human race from destruction makes us love him. He’s not a romantic hero in the sense that the show contains romance (though that might be changing in the upcoming season). But how can we not want to show him how worthy he is of love? How can we not want to be one of the few humans he connects with personally, part of his very small circle of loved ones?

The Doctor doesn’t seek to lead the universe, but he easily could. He’s a complex, very appealing man, and the series makes sure we never outgrow him—or vice versa—by regenerating him every few years. It remains to be seen how much longer they can come up with fantastical situations (I’m really tired of the Daleks, myself) in which he can save people, but the character himself will live—and lead—forever.

Give me your thoughts on The Doctor! Commenters anywhere this full post appears have a chance to win this week's prize, $25 in Omni Bucks from All Romance eBooks/OmniLit!

Email ThisBlogThis!Share to TwitterShare to FacebookShare to Pinterest
Labels: Doctor Who, Fight or Flight, Month of the Hero, TV

I love Doctor Who! But my favorite was Peter Davison. He was a cutie. :)

I admit I never watched the series before Eccleston. But Davison was a cutie! And he was great in the special episode Time Crash. :)

I agree, the Doctor is the best hero ever. I am also getting a bit tired of the daleks -- I get that they're the uber-enemy, but I don't feel they're scary the same way anymore. With Eccleston you knew he was afraid, and he defeated them. After that -- pepper pots that cause mild shivers of dismay. I loved the season finale, though, and can't wait to see what they're up to this season! Excellent post -- obviously caught my attention. Off to check out your new book!

Hi, Anya, thanks for commenting! :)

I think Amy's my favorite companion, and I love her and Rory, and I can't wait, either! The American setting could be brilliant or fail hard, but the hat and hay-chewing are a good start. :)

I just watched season one's pilot of the new Dr. Who last week and really enjoyed it. I'm a big original Dr. Who fan from way back.

Jennifer likes Peter Davison, who was my second favorite. Tom Baker was my fav. Though I think I still might hold a little grudge against Davison for unraveling Baker's scarf. lol!

I'll be interested to see what you think as you go, then, with the new ones!

Ohhhhhhh! I love Eccleston! And I'm just starting the Tenant ones though I already watched most of the Matt Smith ones and a few Tenant ones. Doing a bit of time traveling myself. LOL! I think that the Doctor is the best in a hero because he is humble and yet brilliant. Open to ideas but knows what to do in a crisis. I so want him to fall in love but I guess that's just the romance writer in me :) Dr. Song is a strong woman and they would be wonderful together but I loved the episode with Tenant where he stays with Rose. Le sigh :)

Brilliant but humble is an excellent summation! I envy you having so many great episodes still to discover. I can't wait until it comes back!

I have been watching Dr. Who my whole life. I was amazed that they got Christopher Eccelston to play the Doctor. He was amazing. And then to follow up with David Tennant - WOW! It didn't hurt that they both had Billie Piper as the side kick. I'll admit that I wasn't to excited about the reboot with Matt Smith but I am truly impressed with the episodes. And his side kick Karen Gillan is wonderful. Gosh, did I gush enough!?

The thing that I find fantastic about the three newest Doctors is that as different as they are, they all share the ability to be incredibly goofy and incredibly intense. I love both sides, and I had doubts about Matt Smith, but thought he did a great job.

Misty, I meant to agree with you on the romance thing. And River Song seems to be a good fit in a lot of ways, though she's so much older than Matt Smith! LOL Better fit with David Tennant, I think. :)