McClane of the Die Hard franchise 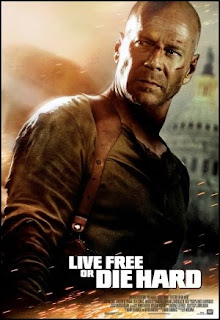 There is one character who could be the poster child for heroic responsibility in modern fiction: John McClane from the Die Hard franchise.

We first see McClane as a strong, well-built tough guy who hates flying. We’re instantly drawn to him during his moment of vulnerability, when he curls his bare toes into the rug. Immediately after, all hell breaks loose and the hero comes out.

John’s a cop, and his wife is one of the hostages, and both of those things feed a person’s sense of responsibility. He has the skills, the training, the ability to do something about the situation. But what he does goes well beyond what most cops and spouses would do. His willingness to sacrifice to save everyone gets him back in his wife’s arms.

"Come out to the coast, we'll get together, have a few laughs..."
Fast forward to Live Free or Die Hard, the most recent DH film. John’s sense of responsibility has become…yes, a flaw. He’s lost his family again. His daughter hates him so much she doesn’t even want his name. This time, she’s the one directly in danger when the bad guys take control. And if there’s anything more dangerous than a man whose wife is threatened, it’s one whose daughter is.

John’s sense of responsibility is embodied in his answer to Matt (Justin Long) when asked why he does what he does. “Because there's nobody else to do it right now, that's why. Believe me, if there were somebody else to do it, I'd let them do it, but there's not. So we're doing it.” That’s what makes him such an appealing hero. He takes responsibility not just for his family, but for the whole country. Never mind that half the government and law enforcement are on the case. McClane doesn’t show disdain for them, or act like he’s superior to them. But he knows they have their hands full, and he doesn’t. Something needs to be done, so he’ll do it. No big deal.

It becomes a really big deal when he blasts a hole through his shoulder to keep the bad guy from killing his daughter, but hey. A guy’s gotta do what a guy’s gotta do.


"Yippee-ki-yay, motherf*****."
The first Die Hard had a romantic component, and his wife is prominent in the first two movies (Bonnie Bedelia wisely stayed away from the third). In the fourth, the writers introduce a fictional anomaly in action movies: realism. The guy who charges in without thought to himself, who makes the world a safer place for his family, loses that family because that’s not what they want from him. He’s not there for his wife on a daily basis, maybe not emotionally accessible. So at the end, he has his daughter back, but not his wife, nor any other love interest.

Clever approach, because it makes John McClane a hero for all of us.

So how many of you love John McClane? Does responsibility drive him, or something else? Don't forget to name some similar heroes for our end-of-the-month showdown, and all comments anywhere this full blog post appears will be entered into a drawing for a $25 Amazon gift certificate!

It makes me sad he doesn't have a heroine. He deserves one. But on the other hand, I understand why. It's a danger I face when I write a hero like that, I think...but I love McClane!

He does deserve one! Though I have to admit, the realism of McClane's relationships defies my usual insistence that love can endure under any circumstances. :)

I liked the first movie but I loved the last one. I liked Tim Oliphant(sp?) as the bad guy too. He does psysho well.
Those flawed heroes are the best.

I did, too, Sue. Some of it was so ridiculous (like the mano-a-fighter jet scene), but the characterizations were so much fun, and the Big Bad scenario fittingly scary. Lucy against Tim Olyphant was awesome. :)

I love me some McClane too. It never gets old. I think he should have a heroine but then what? Another one I liked was Arnold in True Lies and Jamie Lee Curtis.

I think he should have a heroine, too. Someone new!