The Courage of Kurt on Glee

Everyone knows courage is not the absence of fear, but acting despite fear. It can manifest in physical or emotional ways. Physical courage inspires swooning, but what we really long to witness is emotional courage. 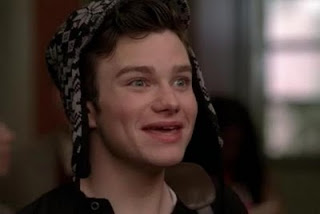 One of the most courageous characters being portrayed today is Kurt on Glee. When the show first started, he was a point of amusement. Resigned to being bullied and tossed in a dumpster every morning, but asking his tormentors to wait while he takes off his designer sweater.

By itself, Kurt’s unconcealed homosexuality is brave. Kurt knows who he is and refuses to hide it, though it would make his life a lot easier. As season one went on, we got to see a little better how hard it really was. Slushies, crushes, and, yes, a desire to belong that led him to the football team.

Kurt came out to his father at a younger age than many kids do. His father is fantastic, but far from perfect, and his inability to understand his son made the decision terrifying. Kurt also let his feelings for Finn show, which was completely disastrous, but still courageous. Like anyone, he wants to be loved.


Dad. I have something that I want to say. I'm glad that you're proud of me. But I don't want to lie anymore. Being a part of the Glee Club and football has really shown me that I can be anything, and what I am, is, I'm gay.

In season 2, the bullying reached terrifying levels. Kurt’s first kiss was abusive, his attempts to reach out to his abuser, to help him, running into a stone wall. Some might say Kurt’s decision to change schools was not courageous, but I think it was. Despite the fear he lived with, Kurt had friends, a group he fit in with. He had to start all over at the new school, and their zero tolerance policy and apparent acceptance of homosexuality among the non-homosexual students doesn’t make him automatically a part of things. This was apparent when he wasn’t immediately embraced by the glee club. 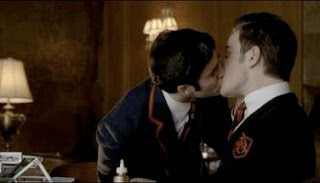 I originally wrote this post several weeks ago, and said, “Romantic heroes don’t have to be big burly men. Love is love, and I hope Glee lasts long enough for Kurt to find someone who truly appreciates who he is and what he has to offer.” In an awesome coincidence, last week’s episode gave us just that! Raise your hand if you absolutely loved Kurt and Blaine’s kiss. And the other kiss!

Glee is the only show of its kind that I watch. So tell me: what other characters out there display the kind of emotional courage Kurt does? Do you consider them heroic?

We’re giving away another $25 gift certificate this week, to the bookstore of YOUR choice! So comment anywhere this full post appears to be entered in the drawing.

Email ThisBlogThis!Share to TwitterShare to FacebookShare to Pinterest
Labels: Fight or Flight, Glee, Month of the Hero, TV

I don't watch a lot of TV and I have never seen a full episode of Glee. I did look up the kiss last week after I read a few discussions about it. It definitely takes courage for someone to embrace who they are and not try to change to please others. I turned on Celebrity Apprentice over the weekend and caught a part where Marlee Matlin and Dionne Warwick were butting heads about being deaf. I realized, yet again, how hard it must be for Marlee Matlin to be a public figure and deal with ignorance everyday. I am sure there are lots of great examples. Thanks for the post.

Yep!! Loved it!! Made me feel all giddy and happy for him. And sigh, "it's about time!" Was too perfect.

You're right, Jen, it takes the same kind of courage for her to do what she does.

Hey, I don't know if you saw, but if you're the same Jen B. who posted on MJ's blog re: Rick from Walking Dead last week, you won the prize! If you don't want Omni Bucks from ARe, you can choose a substitute. E-mail me at natalie AT nataliedamschroder DOT com.

Colene, you should have heard us "awwww"ing and sighing when it happened. We had to rewind and watch again. :)

He's not your typical hero, but he is the strongest, most courageous character on the show.

I chose a lot of atypical heroes this month. :)

The times are definitely changing - they wouldn't dare show anything like this on TV just 15 or 20 years ago... Yay progress. :)

Thanks for doing this giveaway! :) If I win, my email is grig at gmx dot com

You're right, Grig, or if they did show something, it wasn't on a show as mainstream as Glee, and it wasn't as major and yet normal as this one was. :)

Thanks for commenting, and good luck in the drawing! :)

My brother came out to my super-religious parents last December, at the age of 21, and let me tell you, that takes COURAGE. I was hoping my parents would be as cool as Kurt's dad--or at least would have had a clue, but it was rough going for awhile. I'm very proud of him, and glad he has Kurt to look to for a role model

Oh, wow, MJ! I had no idea. I'm sorry it was rough and hope that it is easier for all of you now.

It is--they've found peace living apart, and they actually like my brother's boyfriend, though it's still really hard for them. They're very old-fashioned, but they're also pretty loving. I was scared for a bit we wouldn't get here, but we did!

I'm glad for all of you that you did!

視訊聊天室 said...
This comment has been removed by a blog administrator.
11:27 AM

線上免費試看短片a片 said...
This comment has been removed by a blog administrator.
12:50 AM