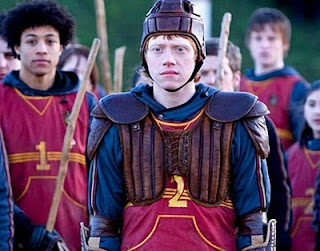 This week’s trait is loyalty, and to me, one of the most loyal characters in literature is Ron Weasley from the Harry Potter series.

Of course, Ron isn’t a “romance” hero in the classic sense. It’s not until Deathly Hallows that he gets enough of a clue (read: emotional maturity) to be worthy of Hermione. But the trait that tells us from the beginning that he’s heroic is his loyalty.


You could say I've got a lot to live up to. Bill and Charlie have already left—Bill was head boy and Charlie was captain of Quidditch. Now Percy's a prefect. Fred and George mess around a lot, but they still get really good marks and everyone thinks they're really funny. Everyone expects me to do as well as the others, but if I do, it's no big deal, because they did it first.

First, is loyalty to his family. As the youngest son and second-youngest child of seven, he’s got a lot to gripe about. But let anyone else ever say a negative thing against any of his siblings or his parents, and Ron’s ready to make them eat slugs. Literally! :)

In Sorceror’s Stone, during the final series of obstacles, Ron takes over a living chess match and sacrifices himself so Harry can go on and Hermione will be safe. He’s injured in the doing, but never wavers from the course he knows he has to take.

In Chamber of Secrets, he doesn’t hesitate to descend deep below the school to save his sister, even knowing how deadly a creature awaits them. For countless adventures, he’s along for the ride with Harry, even when he thinks Harry’s opinions are daft.

Ron’s loyalty gets tested twice in the series. First in Goblet of Fire, when he thinks Harry lied to him about entering the Tri-Wizard Tournament. It’s not a simple cause-and-effect, though. Hermione points out to Harry that he’s always the center of attention, and Ron gets very little, especially in combination with his brothers, who always overshadow Ron in one way or another. Ron’s feelings of resentment and low self-worth come to a head when it looks like Harry just left him behind. He holds on to his anger until Harry undergoes the first task, and by that point, it can’t hold up under reality. Plus, he misses Harry, and just needs something to trigger an acceptable change in his attitude.

Ron never doubts when Harry says Voldemort is back. In Order of the Phoenix, when Harry’s pain and frustration and fear manifest in anger, making him lash out even at his closest friends, Ron stands by his side. He believes Voldemort’s “kidnapping” of Sirius is a trick, but still follows Harry into battle.

The second, much bigger test comes in Deathly Hallows, when the horcrux feeds Ron’s doubts and fears enough to make him leave. Once outside of its influence, he immediately changes his mind, but it’s too late. He can’t come back until Hermione is ready for him to, and the deluminator leads him to the right place. He doesn’t hesitate to dive into freezing water to save Harry and the sword of Gryffindor, and manages to overcome his weaknesses to destroy the horcrux.

That moment is when Ron becomes worthy of Hermione, though she’s pretty tough and makes him suffer a little longer. His loyalty to her is almost as strong as his loyalty to Harry. You could argue that it’s stronger because he’s in love with her. When Bellatrix tortures Hermione about the sword, her screams incite Ron to madness, well beyond what he’d feel if it was Harry in pain. When Ron leaves, it’s Hermione who ignites the light that will bring him back.

Alfonso Cuarón, who directed Prisoner of Azkaban, said in an interview that, narratively speaking, he thought it would fantastic if Ron betrayed Harry. He would have loved to explore the relationships if that happened. As an author, I can understand that interest. But as a reader, I’m really glad Rowling never took it that far, and I never thought it fit Ron’s character. I think Ron epitomizes the trait of loyalty.

What do you think? Is Ron the Loyalty Poster Child? Or are you like Cuarón, interested in a storyline where Ron Goes Bad? Every commenter goes into a random drawing for a $25 gift card to Barnes & Noble. And don’t forget, all of the heroes you mention will be added to the showdown at the end of the month.
~~~~~~~~~~
Check out Fight or Flight, my March release from Carina Press.
Friend me on Facebook.
Follow me on Twitter.
at 12:01 AM

Ooooh, what a great post. Ron happens to be my favorite Harry Potter character of the big 3 (though as a nerdy girl, I sort of can relate to Hermione).

My VERY favorite characters, though, are Neville and Luna. I think a VERY good case could be made for Neville as a loyal and brave hero, too. I just love him!

I, too, am glad Ron never betrayed Harry, though he really tested the limits of my patience when he got upset in the 4th book. But Ron redeems himself just by being who he is -- loyal, lovable, and oh so funny to boot.

I love the Harry Potter series! Our family did Harry Potter interviews recently. We couldn't resist! We seriously love these books.

I can't pick a favorite, Stacy! I love all three for different reasons. And I'm a consummate know-it-all like Hermione. LOL

I adore Neville and Luna, too, and bad-ass Neville in book 7 is awesome. I think he embodies courage, which is our fourth trait. :)

I'll have to check out those interviews! :)

I heart Ron the most. I like the other two and feel connected to them, but Ron is a stand out character. He does get overshadowed by a lot of people but he still has his own light to shine. I love loyal characters and would have been devastated to see him turn completely on Harry. It would have broken something in the books for me.

成人網站 said...
This comment has been removed by a blog administrator.
11:53 AM